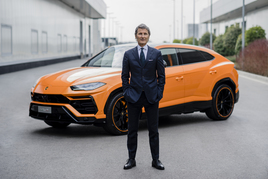 Volkswagen Group have reportedly received a letter of intent from a holding company keen to pursue the acquisition of its Automobili Lamborghini supercar brand.

Autocar magazine said in a report published today (May 27) that it has seen the document which details a planned offer of €7.5 billion (£6.49bn) and a plan to upscale production and launch a pure electric performance vehicle by 2025.

Autocar reported that Quantum Group AG is represented in its acquisition offer for Lamborghini by Rea Stark, a co-founder of Piech Automotive, the Zurich-based company behind the Piëch Mark Zero GT revealed at the 2019 Geneva motor show.

The reported offer for Lamborghini – currently controlled by VW Group-owned Audi – comes just over a week after Stephan Winkelmann, the president and chief executive of Automobili Lamborghini, presented the OEM’s new production and model strategy.

Lamborghini revealed it will invest €1.5 billion (£1.29bn) to cut its CO2 emissions output in half by 2025 and an intention to launch a fully-electric vehicle (EV) – a fourth model for its current line-up – in the second half of the decade.

During the year, the supercar maker was forced into a 70-day shutdown of its Sant’Agata factory.

In the UK, HR Owen is the latest car retail franchisee of the brand to invest in new facilities to help drive sales bolstered by the 2019 introduction of the Urus SUV.

Two months after the top AM100 car retail group’s chief executive, Ken Choo, revealed detail of the plans in an exclusive interview with AM, images of the development have given a glimpse of its true scale.

Construction has already started at the £30m Hatfield development, which will increase HR Owen’s showroom portfolio from 14 to 17 and take its tally of Bentley and Lamborghini franchises to four each.