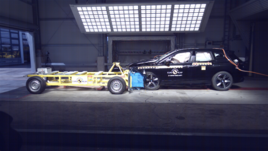 Euro NCAP has slammed the crash test performance of the Renault Zoe and Dacia Spring electric vehicles, suggesting that safety has become “collateral damage” in the group’s transition to EVs.

The facelifted Zoe received zero stars from the organisation after the model update was adjudged to have represented a “degradation” of safety standards, with a downgraded air bag system and a lack of “meaningful crash avoidance technology”, Euro NCAP said.

Euro NCAP suggested the Spring presented a high risk of life-threatening injuries for driver chest and rear passenger head in frontal crash tests and marginal chest protection in side impact.

Michiel van Ratingen, the secretary general of Euro NCAP, said: “Renault was once synonymous with safety. The Laguna was the first car to get five stars, back in 2001. But these disappointing results for the ZOE and the Dacia Spring show that safety has now become collateral damage in the group’s transition to electric cars.

“Only a few months ago, Dacia claimed that they were ‘preoccupied with always increasing safety for those on board’ and that their cars always have passenger safety improved (see Autocar).

“That’s clearly not the case: not only do these cars fail to offer any appreciable active safety as standard, but their occupant protection is also worse than any vehicle we have seen in many years.”

van Ratingen added: “It is cynical to offer the consumer an affordable green car if it comes at the price of higher injury risk in the event of an accident.

“Other cars, such as the FIAT 500e, recently awarded 5 stars in Green NCAP, show that safety does not need to be sacrificed for environmental cleanliness.”

A Renault spokesperson: Renault takes note of the results published by EuroNCAP following specific tests on Zoe E-Tech Electric according to its new protocol implemented in 2020.

“First of all, Renault reaffirms that Zoe E-Tech Electric is a safe vehicle, which complies with all regulatory safety standards.

“These standards are constantly evolving and are becoming more stringent in all domains, especially in safety. Renault therefore continually improves its offer in order to comply with the regulations applicable where its vehicles are sold.

“The evolution of the current Zoe was decided in 2017 adapting the passive safety equipment to real accidentology and updating the car with state-of-the-art ADAS equipment such as Advanced Emergency Braking with Pedestrian and Cyclist Detection, Lane Departure Alert and Lane Keeping Assist, using a radar and a camera.”