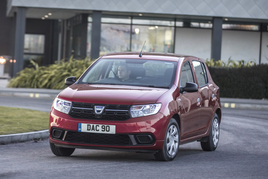 Dacia has been named the UK’s most satisfying car brand, according to the readers of consumer motoring website Honest John.

The low-cost manufacturer - maker of the Sandero, pipped Lexus and Hyundai to the top spot in the consumer motoring website’s Satisfaction Index 2021, which is based on feedback from more than 5,000 car owners.

Honest John readers were asked to rate their vehicles in areas, including fuel economy, practicality, and safety. Drivers were also asked to rank their cars for build quality, reliability and comfort.

The Renault-owned, value-driven car brand revealed what was destined to become the new car market’s cheapest seven-seat vehicle back in September and has now revealed full specification details and prices starting from £14,995.

Dan Powell, senior editor of Honest John, said: “What a tremendous recognition for Dacia that manufacturing a low-cost car doesn’t mean you have to sacrifice any of the things that make your customers happy.

“Cheap does mean cheerful, with readers praising Dacia models for their value, comfort and reliability. The Romanian manufacturer is part of the Renault family and that quality comes through in its high scores for satisfaction and reliability.”

The Hyundai Ioniq was revealed as the best overall car in terms of satisfaction, as well as reliability, which achieved an overall satisfaction rating of 95.7% - marking the second year in a row it’s been named the UK's most satisfying car by Honest John.

Available as a hybrid, plug-in hybrid or pure electric car, the Hyundai Ioniq was praised for its ease of use, handling and build quality and with a satisfaction. The Volkswagen T-Roc (93.7%) followed second and third, the Mazda CX-5 (93%).

Land Rover was ranked the least reliable manufacturer by readers, while Fiat was the brand that offered the least satisfaction with a score of 82.3%

Powell added: “This is a massive piece of research, a real barometer of what the nation thinks of its cars, with more than 5,000 Honest John readers taking part.

“It is also a clear indicator of the rise and rise of electric and hybrid vehicles that the Hyundai Ioniq was crowned the most satisfying car for the second year in a row.”