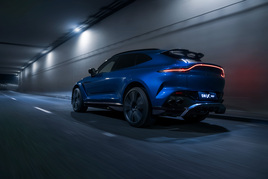 Aston Martin has reported a 79% uplift in revenues and a near-halving of its pre-tax losses ahead of the arrival of the world’s most powerful SUV and a new V12 Vantage coupe.

Operating losses before tax declined 54% to £213.8m in the period, with the brand also claiming that it had delivered “a successfully completed rebalancing of dealer inventory” in the period.

Now the business is targeting 8% volume growth in 2022 with the help of the arrival of the 707PS DBX707 - billed as the world’s most powerful SUV - and a new Vantage V12 coupe to its line-up.

Commenting on Aston Martin Lagonda’s 2021 performance, chairman Lawrence Stroll said that the business had delivered “another of significant progress” adding that the return of the Aston Martin name to Formula One had dramatically increased its brand exposure and desirability.

He added: “We have a strong pipeline of extraordinary products to come with both DBX707 and V12 Vantage this year and a new generation of front-engine cars for 2023.

“This high-performance new portfolio will command stronger pricing and profitability compared with the past, driving delivery of our financial targets.”

Aston Martin’s first electric vehicle (EV) is targeted for launch in 2025, meanwhile, with all new car lines set to have an electrified powertrain option by 2026.

The DBX SUV was the brand’s biggest success story in 2021, resulting in over 3,000 registrations.

In 2020, then new Aston Martin chief executive Tobias Moers revealed the brand’s new 'Project Horizon' strategy, which detailed a wholesale business target of 10,000 cars by 2024/2025 alongside revenues of £2bn and a £500m pre-tax profit.