Was this article useful?
65 people found this useful 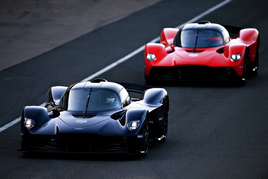 Aston Martin is set to take a Swiss car dealer to court over allegations that it withheld customer payments for its flagship £2.5 million Valkyrie hypercar.

The British car maker is lodging documents with the Swiss criminal prosecutor asking it to investigate the board members of Nebula Project AG and will also bring a civil action against the business.

Aston Martin teamed-up with Nebula Project as part of a bid to fund the Valkyrie back in 2016, long before Canadian Formula One team owner Lawrence Stroll took over the Gaydon-based operation, injecting cash to put it one a stronger financial footing.

Under the terms of the agreement Nebula Project offered to underwrite the Valkyrie project and handle some Swiss customer deposits in return for commission on sales of the hypercar and the subsequent Vahalla and Vanquish models.

Aston Martin has now cancelled the agreement and believes hopes to benefit financially in the long term.

But it expects it will suffer an initial £150m blow to its finances, over the next two years, as a result of the action.

At least £10m of the £15m hit is from the missing customer deposits, it said.

Earlier this year Aston Martin revealed it was planning to increase its wholesale business to 10,000 cars by 2024/2025 and achieve revenues of £2bn and a £500m pre-tax profit in a strategy aiming to "drive growth, agility and efficiency" in the wake of the COVID-19 pandemic.

Delivery of the long-awaited Valkyrie and new derivatives of the DBX are among the key priorities for 2021.

The plan emerged as the brand revealed its 2020 financial results.