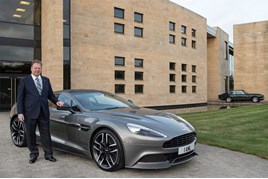 Aston Martin has announced a series of key leadership appointments after news that a consortium led by F1 race team owner Lawrence Stroll has acquired a 17% share of the British sports car maker.

The Gaydon-based manufacturer has confirmed today (January 31) that a consortium led by Stroll, the owner of Formula One team Racing Point, has purchased a £182 million stake in a move that will secure its liquidity.

Penny Hughes, the chairman of Aston Martin Lagonda, said: “The difficult trading performance in 2019 resulted in severe pressure on liquidity which has left the Company with no alternative but to seek substantial additional equity financing.

“Without this the balance sheet is not robust enough to support the operations of the group.

“Notwithstanding recent weak trading, the strength of the Aston Martin brand and our expanding portfolio of cars has allowed us to attract a strong new partner in Mr Stroll to support the turnaround of the business."

Earlier this month it reported that it expects adjusted earnings to shrink to between £130m and £140m in its 2019 results.

Dr Andy Palmer, Aston Martin Lagonda President and Group chief executive said that the manufacturer’s poor 2019 performance had placed it “in a stressed position with severe pressure on liquidity”, affecting its ability to deliver against original growth plans which centred on the production of the DBX SUV.

“Today's fundraising is necessary and provides a platform to support the long-term future of the Company”, he added.

As well as introducing new products in 2020 – including the DBX in Q2, Vantage Roadster in the spring and Aston Martin Valkyrie supercar in H2 – Aston Martin will also now leverage a new motorsport collaboration with Racing Point.

Red Bull Racing will continue to be sponsored by Aston Martin during 2020, however.

Palmer said: “The actions announced today will allow us to implement and deliver on our reset plan and provide Aston Martin Lagonda with a sustainable platform for the future."

Away from the new investment in Aston Martin, a series of appointments were announced within the business today (January 31).

Freedman joined the company in 2010 and has held a number of positions since then, including regional president – sales and aftermarket and director of corporate strategy.

In the US, Laura Schwab continues as President of the Americas whilst being newly-appointed to the Aston Martin Executive Committee, a statement issued by the brand also revealed, as Prudence Medford joins Aston Martin from Jaguar Land Rover (JLR) as director of human resources. This follows the recent retirement of long-standing incumbent Hazel Martin.

Palmer said: “It is always a great pleasure to promote talent from within the business. Nick, Andy and Peter have all been with us for many years, so they know Aston Martin inside and out.

“In these challenging times you need a strong leadership team and that is what we have.

“I’m delighted to welcome Laura to the Executive Committee and Prudence to our Human Resources department.”