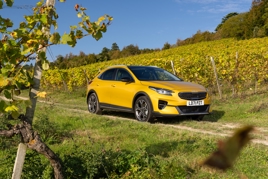 The Kia XCeed emerged as UK motorists' favourite car to own with a top-ranking finish in the annual Auto Express Driver Power 'Best Cars To Own' survey.

The AM Awards 2022's Manufacturer of the Year's crossover gained the best feedback in responses from around 60,000 motorists to lead a top 10 field in which the Tesla Model 3, Skoda Kodiaq and Seat Ateca were the only products not delivered by Asian brands.

Kia's XCeed was the clear winner – a 93.3% overall rating comparing to the second-placed Mazda CX-5 SUV’s 92.2% – with Auto Express noting an unusually strong margin of victory over the most popular runners up, the Mazda CX-5 and Kia Rio.

Auto Express editor-in-chief Steve Fowler said: "It’s clear that far eastern manufacturers like Kia are extending their appeal over European badges in terms of the long-term ownership experience, while the appearance of an EV in the top ten for the first time is another sign that electric cars are becoming a force to be reckoned with."

The ten best cars in Britain, according to their owners, were:

Kia’s position as the only brand to feature twice in the Driver Power 'Best Cars To Own' survey’s top 10 as it claimed four category wins: ‘Best Small SUV’ for the XCeed; ‘Best Supermini’ for the Rio; ‘Best City Car’ for the Picanto; and ‘Best Compact Family Car’ for the Ceed.

The result will be a further boost for the brand aiming to top 100,000 new car registrations for the first time in 2022.

An AM profile feature with Paul Philpott, Kia UK's president and chief executive, revealed how it hopes to accelerate its volumes with the help of the new Sportage SUV and the forthcoming Niro AFV range.

Full details of the 75 car models that made it into the Driver Power 'Best Cars To Own' survey were revealed in Auto Express magazine today (June 15).

Kia wins Manufacturer of the Year at the 2022 AM Awards

Kia wins Manufacturer of the Year at the 2022 AM Awards