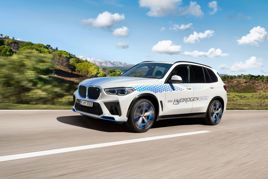 BMW is starting production of hydrogen powertrains at its Munich plant as part of an alternative fuel vehicle (AFV) strategy which includes mass-production in future.

The premium German car maker has revealed that it is initially building a small fleet of iX5 Hydrogen SUVs to be used for global testing and demonstration purposes, following tests of the X5-based i Hydrogen Next prototype.

Oliver Zipse, chairman of the Board of Management of BMW AG, said: “As a versatile energy source, hydrogen has a key role to play on the road to climate neutrality. And it will also gain substantially in importance as far as personal mobility is concerned.

“We think hydrogen-powered vehicles are ideally placed technologically to fit alongside battery-electric vehicles and complete the electric mobility picture.”

Zipse added: “By commencing small-scale production of fuel cells today, we are demonstrating the technical maturity of this type of drive system and underscoring its potential for the future.”

So far, OEMs attempts to sell hydrogen-powered cars in the UK have stalled, with many industry analysts highlighting its suitability for LCVs and HGVs, rather than personal mobility.

The result is a far-cry from Toyota's hopes for the AFV when it launched in 2020.

BMW Group sources the individual fuel cells required for manufacturing the BMW iX5 Hydrogen from the Toyota Motor Corporation. The two companies have been collaborating on fuel cell drive systems since 2013.

Its total power output is 374PS.