The average part of dealer part exchanges sold at BCA fell by £61 in February compared to the previous month, BCA Pulse reports.

While the average value of a used car sold at BCA rose by 0.6% in February 2016 compared to January, with year-on-year values also rising, the drop in part exchange prices came as Simon Henstock, BCA chief operating officer UK Remarketing, warned that buyers were becoming “wary of poorer condition vehicles.”

According to the latest BCA Pulse report the headline average value of a used car climbed by £52 to £7,929 with year-on-year average values up by £115 (1.4 %) and a decline in used vehicles’ age and mileage.

Henstock said that the market was anticipating increased part-exchange business and greater volumes from fleet and contract hire sources over the coming weeks.

BCA is recommending that volume vendors appraise their sale stock closely to ensure it is valued in line with market expectations in anticipation of a resulting impact on residual values in the weeks ahead.

He added: “Buyers have a lot more choice and vehicles requiring repair and refurbishment need to be sensibly valued to compete.

“For cars with cosmetic damage, SMART repairs are a cost effective option for sellers, meaning their vehicles can be quickly processed and presented in the best possible condition.”

Retained value against original MRP (Manufacturers Retail Price) improved by a percentage point to 41.56, from 40.48% in January, with age and mileage broadly static, meanwhile.

Compared to February 2015, average fleet & lease values were virtually static, down by just £11, with retained value down by nearly three-quarters of a percentage point.

Nearly-new values were virtually static at £20,451, down by just £19 over the month. Model mix has a significant effect in this very low volume sector.

Below are BCA's average used prices by sector covering the past 12 months: 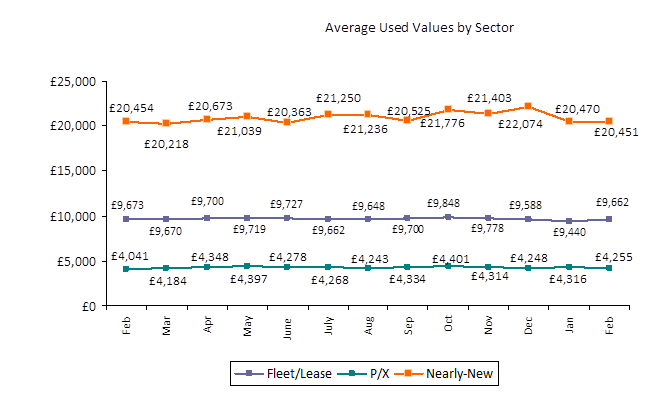