The average UK motor dealership produced a profit of just over £9,000 in April, representing an improvement of £6,000 over the prior year.

The latest figures from ASE also show a return on sales ratio fall, reflective of the growth in turnover levels in the current market. 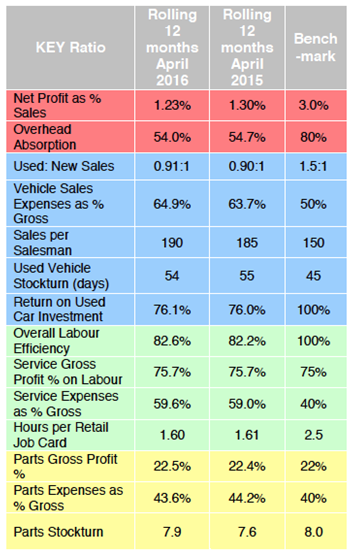 ASE chairman Mike Jones said: "Given the current vagaries of the market it will be impossible to tell whether this is a genuine profitability improvement or the effect of manufacturer fast-start activity until the end of June. One thing which is for certain is that the level of genuine retail activity has undoubtedly slowed in the second quarter. Whether this is the result of people postponing purchases until we have some certainty over the referendum or whether it is a result of a genuine slowing of demand we will have to wait and see.

"Irrespective of the slowdown of retail demand we continue to see a growth in registrations, driven through fleet registrations. Whilst dealers’ used car stocks peaked at the end of March, considerable good work was done during April to bring the value and volume of vehicles down. This was done without impacting margins indicating that we are not yet seeing the forecast dropoff in the market. An improvement in used vehicle stockturn would be desirable to head off any risk, however it is not harming used vehicle margins yet.

"Whilst registration levels are improving month-in month-out the market is definitely more challenging than it was. Fingers crossed it will improve after the referendum."