A push to hit targets in the final days of September has set a new record for the month’s new car market.

At the Paris Motor Show last Thursday AM was told by several carmaker executives that the September market was tracking slightly behind or at best was flat year-on-year.

The Society of Motor Manufacturers and Traders described the market as “steady” and noted that it is only the second time that the two million mark has been passed in September since 2004, the year that the annual market last peaked.

The SMMT data shows fleet registrations continued to drive growth, up 7.3%, while registrations to private motorists experienced another small decline, down -1.7% to 223,844 units in the month.

Alternatively fuelled vehicles continued to outpace the market, up 32.6% against the same month last year, with a market share of 3.4%. 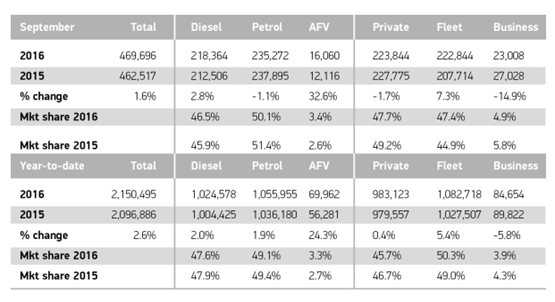 Mike Hawes, SMMT chief executive, said: "The new 66-plate, combined with a diverse range of exciting new models featuring the latest technology, has certainly helped draw buyers into showrooms and many are taking full advantage of the attractive deals and low interest financing options on offer.

“However business and consumers place September orders many months in advance, so the ability of the market to maintain this record level of demand will depend on the ability of government to overcome political uncertainty and safeguard the conditions that underpin consumer appetite.”

Sue Robinson, director of the National Franchised Dealers Association (NFDA), said: “Whilst dealers’ expectations appeared to be split at the beginning of the month, more recent comments from members were fairly optimistic, in line with today’s figures.

“With near record numbers of new vehicles on the road aftersales, undertaken by the franchised dealers, will drive growth in the sector.

“The plate change has certainly helped boost consumers’ confidence and we should not be surprised to see some signs of stabilisation in the next months.

"The majority of dealers expect sales for the last quarter to be similar to last year’s record performance.”