Carwow has revealed that pre-registered cars can cost customers an extra £1,500 when compared to the brand new equivalent.

An investigation by the online car trading platform sought to uncover whether or not pre-registered vehicles really give consumers the best deal after a BBC report in October 2016 showed that up to a fifth of the UK car market could be made up of these vehicles.

Carwow's partner dealers provided quotes on the same specification of vehicle, comparing the monthly cost over a 36-month PCP agreement with a customer deposit of £1,500 of a pre-registered vehicle from 2016, with a new factory order placed on the same day through Carwow.

The result was an average saving of £43 per month for consumers buying a brand-new car.

Over a three-year PCP agreement, that equates to more than £1,500. Some examples are as follows: 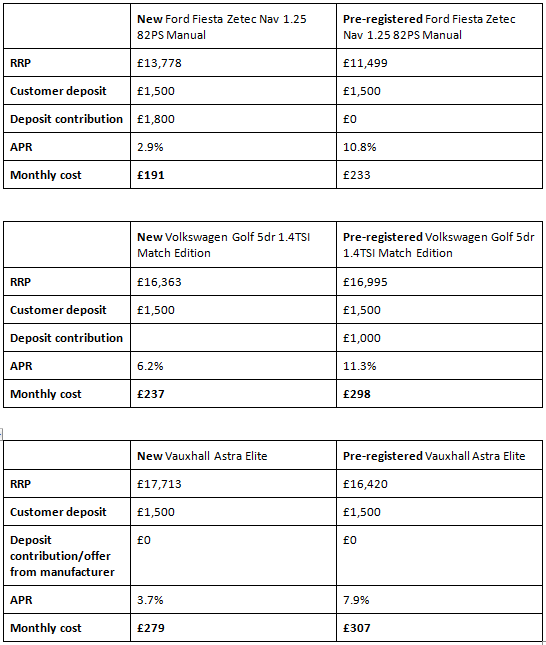 Carwow found that manufacturer incentives, such as deposit contributions, lower APRs and other additional perks more than offset any initial price saving offered by a pre-registered vehicle.

James Hind, founder of www.carwow.co.uk, said: "It's clear to see that new is often the best choice financially for those seeking their next car.

“Pre-registered vehicles have their limitations; firstly, there's less choice. Buyers can only have what the dealer has got, meaning they may need to compromise on colour or specification.

“Secondly, the chances are, they’re older vehicles.  Dealers will pre-register the oldest and cheapest cars on their forecourt first, meaning they’re often the oldest stock or the least desirable models.

“For those looking to order a new car, it’s clear they’ll get more for their money buying a new car than they would a pre-registered one."