Well over half a million new cars were registered in March 2017, setting a new record, as carmakers sought to get customers into new vehicles ahead of the punitive new VED regime which started on April 1. 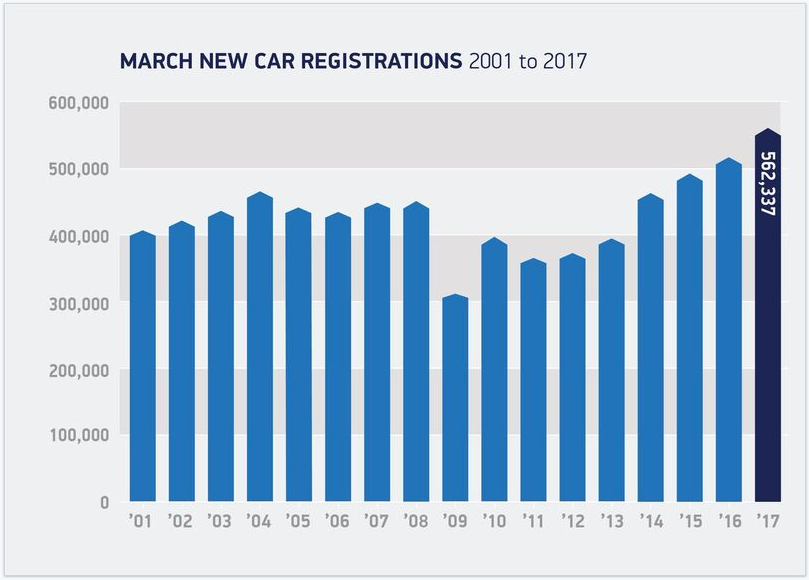 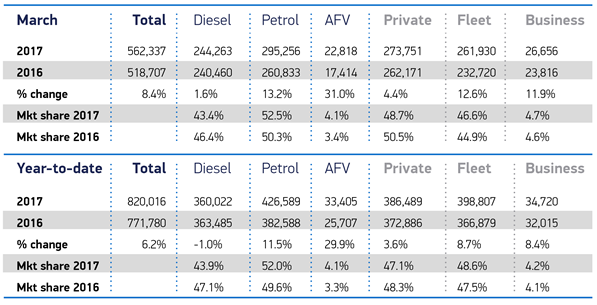 This bumper performance probably means we will see a slowdown in April, exacerbated by the fact there are fewer selling days this year given Easter timing.

"Looking ahead to the rest of the year, we still expect the market to cool only slightly given broader political uncertainties as there are still attractive deals on offer.”

Julian Rance, Paragon Car Finance director, said: “The latest figures from the SMMT indicate strong market growth but should be taken with some caution.

"The bulk of growth, 12.6%, has come from increased fleet registrations, compared to 4.4% growth in private registrations.

"This would indicate that much of the increase in registrations has been driven by increased flows of pre-registration vehicles from manufacturers. Manufactures have been keen to boost March sales and counteract some of the negative impact on sales created by a weak pound.

“And while 4.4% growth in consumer registrations is to be welcomed, much of this demand will have been inflated by customers looking to beat the vehicle excise duty deadline. So, while today’s figures are positive, we think it is likely that the market through the rest of 2017 will see decline between 5-10%.”

Simon Benson, director of motoring services at used car website AA Cars, said: “Last month saw a flood of buyers rushing to beat the new vehicle excise duty charges that kicked in at the start of April, making March the biggest ever month for the UK’s new car market.

“Fleets - hit hardest by April’s tax changes - fuelled the sector’s growth last month as the biggest contributor to new car registrations, driving it up by a significant 12.6%

“Meanwhile sales of alternative fuel vehicles, including some models which as of this month will no longer benefit from a zero-rate fee, grew by almost a third (31%) last month.

“This reflects recent AA Cars research, which shows that purchasing intentions for electric and hybrid vehicles has doubled over the last two years.

“Of course, the repercussions of this rush could mean that the new car market will see a considerable slowdown in the coming months - which could prove to be a boon for used car dealers.”

Mike Allen, of Zeus Capital said: "While Q1 2017 will go down as a record for the industry, we believe the true impact of Brexit has yet to play out.

"OEM behaviour over the coming months is likely to be FX driven, and we are monitoring consumer confidence trends carefully.

"New car price inflation will also play a major role in the outcome of 2017 and beyond.

"We also note the change in tax rules that come into force in April.

"As the SMMT has stated this has likely pulled sales forward into Q1, meaning registrations trends will likely weaken from here.

"The current tax scheme is based on CO2 emissions with new rules slashing a current tax exemption for low emission cars, which after April, will only apply to vehicles with no CO2 emission at all ie mainly electric cars.

"In addition, cars with an official price of over £40,000 will also face an annual “wealth tax” amounting to over £1000 over 3 years in some cases providing an additional cost pressure for the consumer.

"Elsewhere, we believe demand in the used car market remains strong with volumes expected to be at record levels for 2016 according to Cap HPI, with residual values also robust. We also anticipate trends in the aftersales market to be robust given the rising UK car parc, albeit note potential cost pressures with the apprenticeship levy as previously flagged."

"A stabilisation in the market is expected”, said Sue Robinson, director of the National Franchised Dealers Association.

"As a result of the registration plate change, March has historically been a good month for new vehicle sales and this year is no different with 562,337 new vehicles registered. This, combined with new VED rates, which came into effect on April 1 and prompted buyers to bring their purchases forward into March, have also helped the market throughout the month.

“The positive momentum seen in the alternative fuel segment is encouraging, but the Government should continue to actively support consumers who are willing to switch to greener cars. The small growth of diesel in March shows that there still appears to be a market for cleaner and modern diesel vehicles in the UK.”

Paul Kaye, sales and marketing director at Close Brothers Motor Finance, said: “The demand for new cars in March was given a much needed boost following a quiet February. Car buyers held out for the new 17-plate and took advantage ahead of the VED rate changes.

“Despite growth picking back up, rising inflation and the impact on consumer spending could produce headwinds on new car growth and we are already seeing changes in consumer buying patterns. Dealers need to ensure they’re aware of current trends, as 40% of dealers see consumer behaviour changes as one of the greatest threats to their business in the coming months.

“Consumers are preferring to finance one-to-three year ‘nearly new stock’ over brand new vehicles. Given the quality and value of cars available in this market, as well as the general economic outlook, we expect that this trend will continue in coming months, which could be good news for dealers in the used car market.”

James Hind, Carwow chief executive and founder, said: "The last month made for a crucial time in terms of consumer behaviour in the lead-up to the new set of rules governing VED, which came into effect on April 1.

"The introduction of this new rule essentially means that whilst some new cars are now cheaper to tax, others are now significantly more expensive, hence an increased number of Britons using the final weeks of March to make financially savvy decisions regarding the purchase of new vehicles.”

“At Carwow, we witnessed the volume of customers searching for stock cars go up 9% from the start of March, with the rate of those browsing the site converting into sales up 12% from the month before.

"Overall, March sales of stock vehicles versus factory orders is up 5% compared to February, which was particularly intensified during the final days of March, presumably as consumers scrambled to beat the new tax hike. It will be interesting to now see how April fares in terms of new car sales, and in particular how the VED changes will affect the sales of more environmentally friendly cars, with lower CO2 emissions.”

Rupert Pontin, Glass’s director of valuations, said: “The bumper new car registration figure of over half a million vehicles for March was not unexpected at all as manufacturers sought to move cars to the market ahead of the new VED changes, which also coincided with the new registration plate release. The 8.4% boost over last year’s figure shows all fuel types to be on the increase, but the petrol car uplift of 13.2% is significant.

"With diesel registrations up just 1.6%, albeit to a record-breaking single month volume, the market does appear to be seeing a move away from this fuel type amidst speculation of both increased personal taxation and city centre charging. It will be fascinating to look at the real world retail advertising data in the coming weeks to see how many of these were true registrations and how many were tactical pre-registered units that will bounce straight to the used market.

"The year-to-date increase in registrations of 6.2% over 2016 is impressive but unlikely to be sustainable as manufacturers shift production focus to more profitable European countries.  Glass’s still predict that the year will finish a more sensible 3.5% lower than 2016.  However, when all is said and done, the UK car market remains buoyant with strong consumer demand for both new and used cars - which is really good news.” 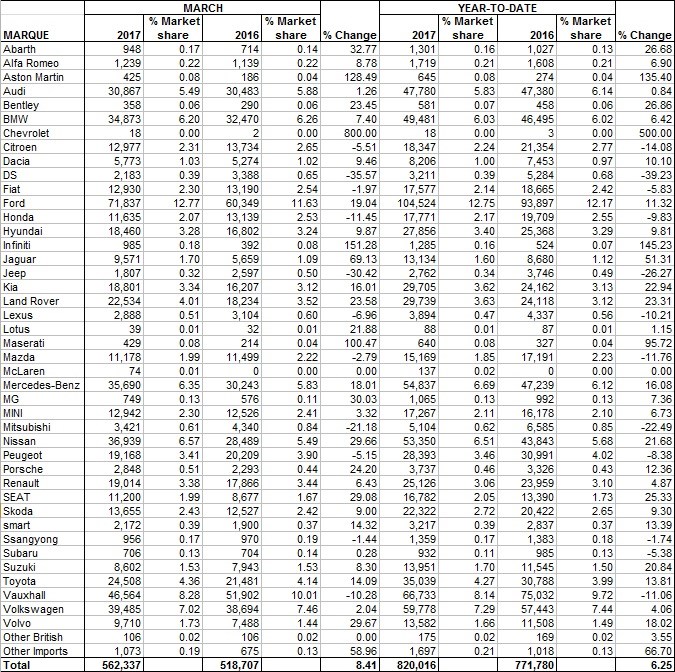