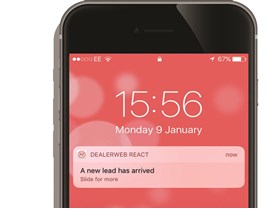 The poll by Dealerweb asked 1,000 motorists about their attitudes towards the car buying process. The results show that under 35s prefer to receive email, social media or SMS updates. In comparison, only 24% of buyers over 55 years old favoured electronic means of contact.

While 27% of motorists in the 18-34 age group are happy to speak to dealers by phone, more than half would prefer to communicate with dealers via text, email or social media.

Preference for email communication is noticeably higher among younger car buyers, with 42% of under 35s favouring emails over other forms of communication, compared to just 21% of buyers over the age of 55.

Dealerweb recently carried out research across its customer network of more than 200 UK dealers, which indicated a 16% increase in overall enquiries during the first quarter of 2017. Enquiries from online sources accounted for the entirety of this growth, increasing by 21% over the same period in 2016, while the number of physical walk-in enquiries remained unchanged.

Dealerweb’s managing director Martin Hill, said: “Dealers are witnessing dramatic growth in the number of web-based customer enquiries, representing a clear shift in consumer behaviour. Younger car buyers – ‘digital natives’ – have grown up using electronic forms of communication, and appear more comfortable than older buyers using them for interaction with car dealers. This trend is only likely to accelerate, and the most effective sales teams in the coming years will be those who are more open-minded about using the latest digital tools to engage with prospective buyers.”

Research released at the end of 2016 suggested 49% of buyers were more likely to complete a car purchase if they receive a response to an online enquiry within one hour; 25% of buyers said they expected a dealer to respond in under 30 minutes.

In response to these results, Dealerweb has launched a new multi-platform software solution called ‘React’. It aims to improve dealers’ response time to online enquiries and enable sales staff to react quickly to online leads.