Dealer satisfaction with their carmaker partners has suffered a drop since the winter, according to data published by the National Franchised Dealers Association in its twice-yearly Dealer Attitude Survey.

But the results bring good news for Kia, which has topped the survey for the first time, ending the long reign of Mercedes-Benz.

The same cannot be said for Nissan, which has come bottom.

“The overall relationship between franchised car dealers and manufacturers recorded an average score of 5.6 in the Summer 2017 Dealer Attitude Survey, which is -0.5 points down from the last survey and -0.6 lower than the same time last year”, said Sue Robinson, director of the NFDA.

On how dealers would rate their manufacturers overall, Kia scored the highest, 9.2 points, ahead of Mercedes-Benz with 9.0 points and Lexus with 8.4 points, then Suzuki (8.0 points) and Toyota (7.8 points). 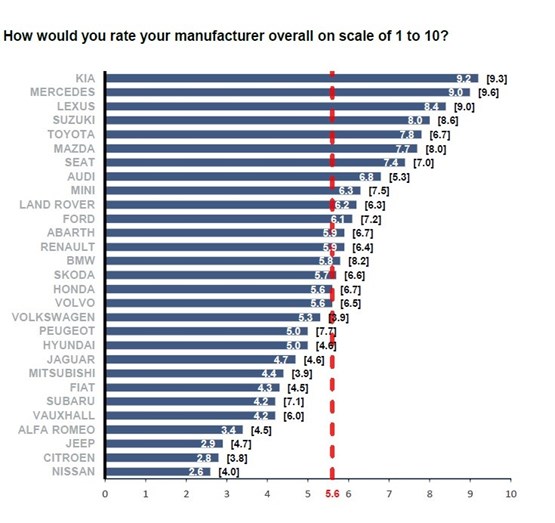 Robinson (pictured) added: “The Summer 2017 survey had an encouraging response rate, with considerably increased response return from smaller dealerships, highlighting the importance of the survey for both dealers and manufacturers enabling them to monitor and evaluate the health of their relationship.

“The results of the survey show that external factors might have put a strain on the dealer-manufacturer relationship. However, despite the substantial decline in the average score of the manufacturer rating question, more than 60% of the dealer networks surveyed returned a score above the neutral point of 5.0.

“Although average scores across the majority of the questions have generally declined, some networks continued to perform well following recent success and others showed significant improvements. Notably, Kia reached the first place in the all-important question and Audi recorded the highest increase in score across all the questions of the survey.

“In a period of uncertainty where a coordinated and combined approach is needed to deal with a number of important issues currently facing the industry, it is vital that manufacturers and dealers continue to work together to safeguard the interests of the automotive sector.” 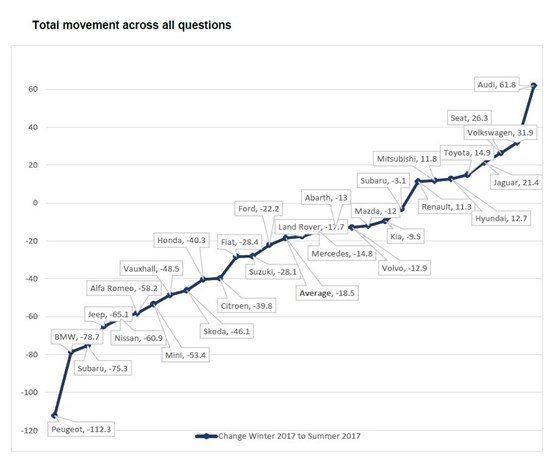