The 2017 used car market has flattened since its peak in the first quarter, but year-on-year performance is continuing to decline after the record volumes of 2016.

The record Q1 market has ensured that 2017 currently remains ahead by 9,096 units, or 0.1%. However, the slowdown that started in Q2 is expected to continue – franchised dealers have told AM the market has noticeably quietened – and the year is expected to close between 2016’s record
8.2 million used car market and 2015’s 7.6m. 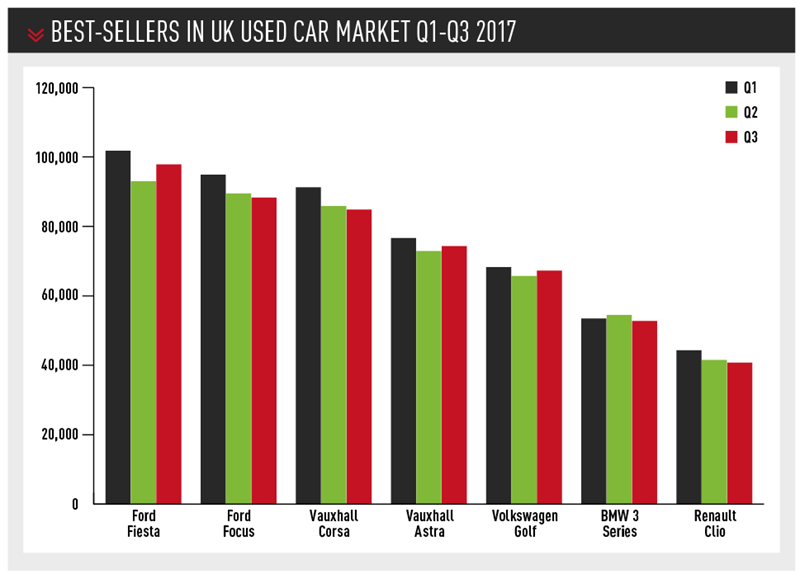 Yet average dealer performance statistics published by ASE Global show franchised dealers’ ratio of used car sales to new had improved to 1.3:1 by September, from 1.23:1 at the end of June. This was likely due to the decline in retail new car sales rather than a rapid uplift in used cars.

Used vehicle average days in stock has risen by three days, to 57.7, and there are indications that dealers are sitting on more nearly-new stock than would be ideal.

“We have seen a slight rise in the average stand in value per unit at the end of September, indicating an increased presence of self-registered units,” said ASE chairman Mike Jones.

“This is contrary to the normal trend in a plate-change month, where the volume of part-exchange vehicles normally drives down average levels. The profitable disposal of these vehicles will be key to medium-term performance, with retailers requiring to re-profile their stock.”

Mike Hawes, the chief executive of The Society of Motor Manufacturers (SMMT), said: “The used car sector remains in good health as motorists take advantage of some great deals on cars – including some of the latest low-emission diesel and alternatively fuelled vehicles.

“However, as demand in the new car market cools, used car sales normally follow suit unless there are significant tax changes affecting the new car market.” SMMT data showed demand for used diesels was up 4.2% YTD, at 2.5m units, a 39.4% share of the market.

‘No drop in demand for used diesels’

The head of one large regional dealer group, who asked not to be named, told AM his dealerships had not seen a decline in demand for used diesel cars. This is contrary to the overall new car market, where diesel registrations in the first 10 months of the year have dropped 15% compared with the same period in 2016, due partly to concerns about potential punitive taxation and charges.

“It doesn’t seem to have put off many used car buyers,” the dealer group boss said.

“They’re still attracted by the benefit of fuel economy, and used diesels that were registered before the VED change this year are pretty
affordable to tax at the moment,” he said.

A two- or three-year-old diesel with less than 120g/km official CO2 emissions incurs a maximum of £30 for annual VED, and those with emissions below 100g/km pay nothing. A similarly efficient newer diesel, registered since April, would incur annual VED costs between £120 and £160.

However, the Budget, which was due to be revealed after this issue of AM went to press, was widely expected to include some kind of measure to increase the costs of owning diesels, and next March councils must publish plans to improve air quality in their area.

Islington Council, for example, has proposed charging  all diesel vehicles – including Euro 6 diesels and diesel hybrids – with a £2 per hour visitor parking surcharge from early next year.

Barrie Crampton, owner of BC Cars, said: “Our sales have not been affected at all so far, and we are also very busy with vans. I don’t think I have ever sold a petrol van, so a diesel tax seems to be a great way to mess up the future economy.”

Nevertheless, the Vehicle Remarketing Association has called for used car buyers to be better informed about diesels. Its chairman, Glenn Sturley, said: “It is rapidly becoming obvious that there are a lot of misconceptions circulating among used car buyers about diesel, often prompted by some poorly researched journalism in the national press.

“We are in a situation where some consumers are starting to identify diesel as undesirable from an air quality and emissions point of view, and starting to avoid them.”

Research by Auto Trader of 13,000 motorists found that half (49%) said the media coverage of diesel had made their car-buying decision more challenging, and a third (35%) said they did not understand the benefits of different fuel types well enough to make an informed choice.

“With inflation on the rise, and the first interest rate rise in a decade on consumers’ minds, buyers will get ever-more price conscious in the months ahead,” he added.

Cap HPI said diesel values held up well throughout 2017 and have seen better than average seasonal depreciation for each of the past four months. Petrol and hybrid values have been particularly strong in recent months, as buyers seek an alternative to diesel where available.

“We consider this current strength is not sustainable beyond the short term and values will start to fall back as they start to look too expensive and used supply starts to increase,” said senior forecasting editor Andrew Mee.

“Our Gold Book forecasts take into account the anticipated gradual change in the balance of supply and demand for different fuel types, which will vary by sector.

“We do not believe that diesel values will fall off a cliff, but they will erode more quickly than petrol values, particularly for smaller cars, until the balance of used supply starts to switch
to petrol.”

Simon Benson, director of motoring services at AA Cars, said: “Dealers should consider this an opportunity to advise customers and help them identify the fuel type that’s right for their specific needs.”