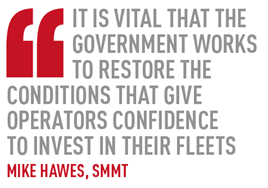 The decline in the market for new light commercial vehicles has been described as “worrying” by the Society of Motor Manufacturers and Traders (SMMT), as it continues to lobby the Government for more support and stability for the automotive sector.

After 2016’s record van market, where LCVs with payloads up to 3.5 tonnes reached 375,687 registrations, orders have been in steady decline. With one month’s trading to go, the 2017 market was 41,554 registrations short of the 2016 record. An average 28,000 December registrations over the past three years suggests the market could end up 3.6% down, its lowest level since 2014.

At the same time, business confidence has faltered. The BDO Output Index, which indicates how businesses expect their order books to develop over the next three months, from a survey of more than 4,000 companies across all industries, fell to 99.9 in October, and dropped further to 98.9 in November. It was the first time in 15 months the result had slipped below 100, the marker for anticipated growth. Peter Hemington, a partner at BDO, said the political and economic climate is “stunting” growth.

Demand for replacement vans is naturally affected by the confidence of British industry.

Mike Hawes, the SMMT’s chief executive, said: “Economic and political uncertainty continues to affect business confidence and with it new van purchasing patterns, which is damaging both for the market and for efforts to improve air quality. Getting more of the latest Euro 6 LCVs onto our roads is the fastest way to reduce emissions so, to avoid a prolonged downturn, it is vital that the Government works to restore the conditions that give operators confidence to invest in their fleets.”

Vauxhall and Renault are significant sources of the decline in the new van market. Their registration volumes for the first 11 months of 2017 have dropped by 25% each year-on-year, or 9,003 and 5,944 registrations respectively. Land Rover accounts for a further 3,899 of the year’s volume  decline, after it began running out the Discovery Commercial in 2016 and it ceased LCV registrations at the end of Q2, while Volkswagen is also down 3,572 units, despite having grown registrations in Q1.

Sue Robinson, director of the National Franchised Dealer Association (NFDA), said she had received feedback from members that weaker sterling is starting to force some manufacturers to increase the prices of products coming from the Eurozone, and they expect the market to remain subdued.

Market leader Ford is bucking the trend, tracking 2,106 registrations, or 2%, ahead of last year and increasing its market share by almost 2ppts to 32.5%.

Andy Barratt, Ford of Britain’s chairman and managing director, said it was “particularly positive” to achieve growth in the declining CV market. Ford announced in early December that its scrappage scheme will be extended through Q1 2018 in an attempt to generate more business from tradespeople. The scheme discounts Ford’s commercial vehicles by between £3,650 and £7,000, depending on the model. Ford’s Transit Custom, currently the UK’s best-selling new van at 47,105 registrations, carries a £5,500 customer incentive in the scheme, effectively a 25% discount on the entry-level version.

Toyota introduced the new Proace panel van last year and has almost trebled its volume to 2,020 units, with the HiLux pick-up accounting for the rest of the growth.

Peugeot’s Expert medium van has grown sales, and Mercedes’ growth is across its small product range, which will be boosted next year by the arrival of the X-Class pick-up, which targets SMEs and retail buyers mostly. The German brand also promises a series of electric vans from 2018, starting with the Vito.

New niche brands are also faring well in 2017. SsangYong’s LCV registrations have risen 47%, or 126 units, as it has competitive contract hire offers on its Musso pick-up (£199+VAT monthly) and outgoing Rexton CSE van (£271+VAT monthly). Dacia’s low-volume commercial version of the Duster SUV (£10,095+VAT) has grown sales by 6%, and now truck brand MAN has entered the LCV market with its TGE panel van, which is based on the Volkswagen Crafter. It recorded its first 58 registrations in November.

LDV, which was relaunched here in 2016 by Ireland-based independent distributor Harris Group after the brand went bust in 2009 and was bought by China’s SAIC, is building rapidly on its first year of sales, up 50% at 351 registrations.

That Great Wall is the only niche brand to decline, down 85% or 170 units, suggests independent distributor IM Group is putting profit ahead of the Chinese brand’s volume  due to currency fluctuations.

Van dealers will be looking for efficiencies as the market downturn continues – the SMMT believes the annual market, including heavy vans and taxis, will continue to slowly decline, to 354,000 in 2019.