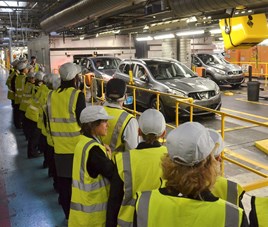 Strong demand in Europe was unable to stem the slump in UK car manufacturing during November – with outputs down 4.6% year-on-year.

Overseas orders rose by 1.3% during the month as exports reached their highest proportion of output this year, at 85%, but production for the home market continued to falter, falling for the fourth month in a row.

Demand for cars in the UK dropped by 28.1%, according to the SMMT – the largest decline in 2017 – as consumer confidence decreased and speculation over negative government policies towards diesel affected the market.

“Whilst it is good to see exports grow in November, this only reinforces how overseas demand remains the driving force for UK car manufacturing.

“Clarity on the nature of our future overseas trading relationships, including details on transition arrangements with the EU, is vital for future growth and success.”

Yesterday AM reported on Jato Dynamics Europe-wide registrations figures, which revealed that Europe’s sales had grown by 5.2% as the UK posted the region’s biggest decline, of 11.2% during the month.

Year-to-date, more than 1.5 million cars have rolled off production lines, with nearly eight out of 10 destined for one of 160 global markets.

The SMMT reported that, while export volumes remain stable, production for the home market is down by 9%, resulting in overall output falling 2% since January.

Speaking in AM’s ‘Outlook 2018’ feature in the latest edition of the magazine Zeus Capital Market analyst Mike Allen highlighted the trend and suggested that the diversion of some car production into Europe could be good news for UK car dealers.

In his ‘Prospects for 2018/19’ report Allen said that the trend could see an easing of pressure and renewed focus on profitability for retailers, stating that the trend could have the positive effect of “tightening used car markets as the oversupply in the 0-3-year market starts to ease.”