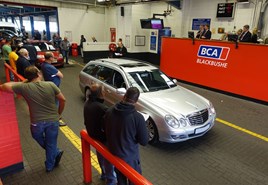 BCA recorded its fourth consecutive record month of used car prices in a monthly Pulse report which showed values had risen by £465 to £9,868 during December.

The headline figure was up by £1,527 year-on-year – equivalent to a substantial 18.3% improvement – as buyer demand remained “consistent throughout the month”, according to BCA managing director of UK remarketing, Stuart Pearson.

"December is the shortest trading month of the year and both the market sector mix and model mix tend to change quite significantly,” he said.

“Fleet and lease stock is typically in more limited supply, whilst dealers continue to sell part-exchange vehicles as a result of their ongoing retail activity.

“Buyer demand was consistent throughout the month and carried on to BCA’s digital platforms over the Festive Season.”

Average values remained at near record levels in the fleet and lease sector, with the December figure of £10,604 representing a small decline (0.3%) against November.

Retained value against original MRP (Manufacturers Retail Price) was 41.85% in December. Year-on-year values were up by £939 (9.7%), as both average age and mileage continued to reduce.

Once again, looking at the longer trend, BCA’s part-exchange values have climbed steadily during 2017, reflecting the substantial levels of business BCA has won and retained in this sector.

The BCA Pulse report said: “Model mix has a significant effect in this very low volume sector, with brand specific winners and losers.”