New car registrations have reached their highest level since 2008 as a result of double-digit growth in key markets such as Germany, Spain, the Netherlands, Belgium and Poland.

Volumes across the 27 territories included in Jato Dynamics’ monthly report showed volumes up by 7.1%, with 1.28 million cars registered last month, 84,000 more than in January 2017, as volumes fell by 6.3% as the market started 2018 with the lowest January total since 2014.

The automotive data specialist said that the “impressive results” marked the highest January volume since 2008, as well as the highest monthly percentage growth since May 2017.

Felipe Munoz, JATO’s global analyst, said: “We are seeing good indicators of what is expected to follow in the coming months. It’s too early to conclude, but January is certainly a more positive sign than was expected.”

The UK was the exception as Europe’s largest markets all posted an increase in registrations.

Jato said that Eastern Europe generated the most growth, however. Romania recording the largest year on year growth, with a significant 66.4% increase, followed by Slovakia at 47% and Hungary at 38.6%.

Meanwhile, Norway posted the largest decrease with a 29.2% decline, which was significantly ahead of the UK in second place, which posted a 6.3% decline. 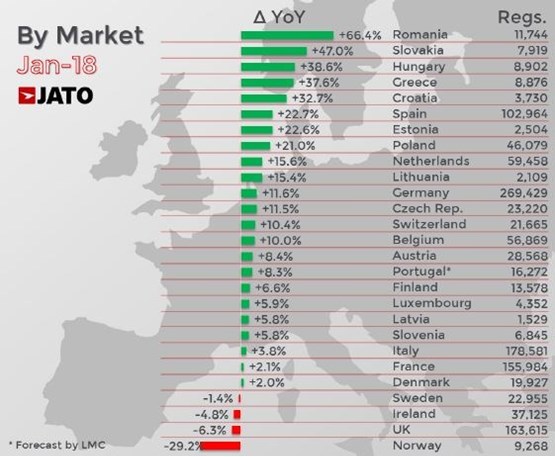 Jato said: “This represents a 7.6ppts decline for diesel and a 6.5ppts increase for gasoline in just one year.

This meant that one in every three cars registered in January 2018 was an SUV.

The small SUV sub-segment saw registrations grow by 39.7% in January, boosted by the arrival of VW Group to the market, which posted an increase of 123.1% in small SUV registrations.

PSA also posted a large increase of 54.2% and outsold Renault-Nissan to become the top seller in the sub-segment.

VW Group performed well in January, as demand for its latest SUV models allowed it to offset the impact of the diesel crisis, Jato said.

The growth was driven by Porsche, as well as Skoda and Seat, which were both up by 22% and 21%, respectively.

Volkswagen’s Golf once again came out on top as Europe’s most popular model. The model posted a 15% volume increase and recorded 17,300 more registrations than the second-placed Ford Fiesta.

The Tiguan was also the best-selling SUV for January, despite posting a volume decline.

Conversely, it was a bad month for Opel/Vauxhall, with the Astra and Corsa models posting volume decreases of 32% and 19%, respectively. 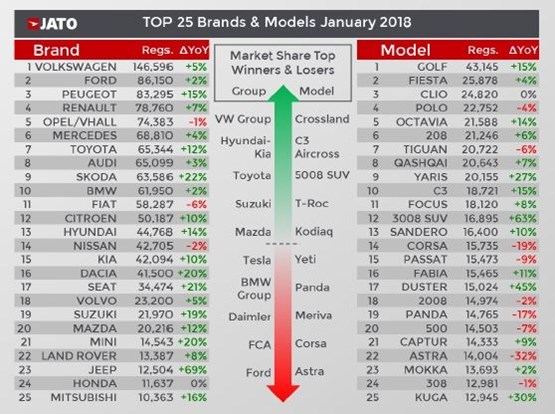