The rise of 3.4% in car registrations in May 2018 looks like good news. However, as the SMMT pointed out, it was mostly due to a bad month in May 2017 (buyers had pulled forward sales to avoid the new VED rates), plus the uncertainty around the general election in June 2017.

The pattern at a manufacturer level looks broadly familiar. The “domestic” brands of Ford and Vauxhall are suffering, German brands are doing well, and life is tough for French and Italian companies.

Volkswagen has consolidated its position as the second-best-selling brand in the UK (8.4% market share YTD, exactly one percentage point ahead of Vauxhall). With the new, sixth-generation Polo, VW is only likely to further extend its lead.

Just behind Vauxhall is Mercedes-Benz, in fourth place at 7.1% market share YTD, so the gap to Vauxhall is only 0.3 percentage points. However, Mercedes may be more concerned about the shrinking gap behind it, than the one in front of it: Audi outsold it in May (Mercedes actually had a poor result last month), and Audi is now only 0.2 percentage points behind, at 6.9%. There is now a little clear water between Audi and BMW, as the latter has a YTD share of 6.4%. 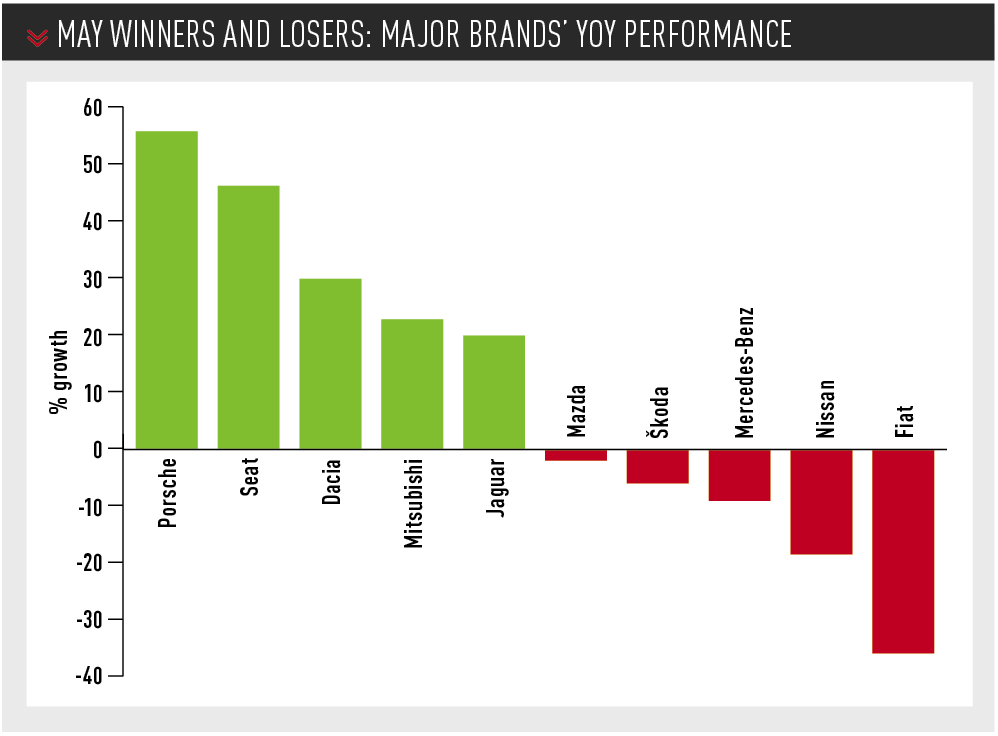 The biggest decline among the top 10 UK brands has come from Nissan, whose volumes have fallen 29.3% YTD to a market share of 4.7%. Specifically, the issue is the Juke, which is down 42.9% YTD, and has dropped from the top spot in B-segment crossovers to third place, behind the Vauxhall Mokka and even the lacklustre Ford Ecosport. Admittedly, the Juke had a facelift last month, but it is hard to believe such tiny changes (in essence, a new grille, foglights and new colours) could have had many people holding off for the revised model.

At 4.3% market share, Toyota is just 0.4ppts behind Nissan – how much would Toyota like to reclaim the top spot from its arch-rival in the UK? Toyota has a much broader range of models

than Nissan, but it has no smash-hit products – the new C-HR crossover is doing good business, but it is still outsold by the Nissan Qashqai by a ratio of 3:1.

Behind Toyota are Hyundai and Kia (both at 3.9% YTD), who round out the top 10. They have enjoyed fractional market share gains this year thanks to the new B-segment crossover twins, the Hyundai Kona and Kia Stonic, which have both got off to a good start.

Elsewhere in the market, there are a few manufacturers worth focusing on. Jaguar Land Rover (JLR) is hitting its first patch of turbulence since it emerged from the financial crisis as the car industry’s great success story.

At Land Rover, market share is down slightly at 3.3% YTD, from 3.4% in the same period last year (although sales did go up in May). That is no disaster, but we are so used to seeing relentless growth from Land Rover that it looks like bad news.

Interestingly, there is a sharp division in fortunes within the company. The more affordable models (Evoque and Discovery Sport) are down 29%, but the luxury models (Discovery, Velar, Range Rover Sport and Range Rover) are actually up by 20%. That suggests the revenue hit to Land Rover is less than the sales hit, but a major part of the company’s strategy is to extend the range downwards – after all, it can hardly increase its share of £60,000-plus SUVs much further. A decline in sales of the ageing Evoque is only to be expected, but a fall of 23% in Discovery Sport sales is more worrying. A comparison with the Audi Q5 is instructive – total Q5 sales have gone up by 87.6% YTD, and the petrol mix is 45.1%, whereas the petrol mix of the Discovery Sport is just 6.4%. It seems the Discovery Sport needs a more credible petrol or hybrid option.

The biggest decline among mainstream manufacturers came from Fiat, whose sales fell 26.1% YTD (market share 1.8% YTD). At his recent farewell press conference, Sergio Marchionne, the ever-quotable boss of Fiat, said the company would henceforth concentrate on growing Jeep, Alfa Romeo and Maserati (plus Ram pick-ups, not sold in Europe). That would be fine, except that YTD sales of Jeep have fallen by 16.7%, Alfa Romeo by 6% and Maserati by 27.3%. Although it could be argued that Alfa Romeo sales have tracked the overall market, 2018 was supposed to be the year of recovery thanks to the new Giulia and Stelvio. Indeed the combined market share of the three Fiat specialist brands is just 0.5% YTD - for reference, Porsche alone is on 0.7%.

Infiniti and beyond 2020? Perhaps not

The wooden spoon for worst overall performance goes to Infiniti, whose registrations are down by 74.0% YTD to an infinitesimal 0.04% market share. The culprit is the Q30/QX30 – although built to astonishing levels of quality (suppliers to the Qashqai who thought they were already at the quality pinnacle were shocked by the incredible demands of Infiniti), it is completely unwanted by the market. The bizarre decision to base it on the Mercedes A-Class platform when the Qashqai platform was available from the same Sunderland factory has not helped – what is the value of a Mercedes A-Class minus the Mercedes brand? One has to assume that Infiniti is the brand most likely not to appear in a 2020 analysis of the UK market. DAVID FRANCIS