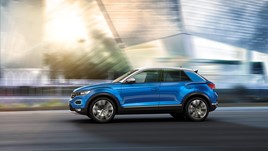 The European new car market saw growth of 2.7% to 8.66 million units in H1, despite the UK recording the biggest slow down in registrations across the continent in the first half of 2018.

According to the latest data from JATO Dynamics, Europe’s other large new car markets of Germany, France and Spain posted positive performances and declines in the UK were also offset by medium-sized markets like the Netherlands, Poland and Sweden.

Felipe Munoz, JATO’s global analyst, said: “It was certainly a good first half for the European market and this is due to the choice that consumers now have.

“Carmakers continue to update and modernise their traditional models, while the range of SUVs on offer continues to grow and appeal to all kinds of budgets and needs.

“The diesel crisis certainly affected the speed of growth in the market, but consumers are overcoming this by turning to more attractive gasoline and AFV solutions.” 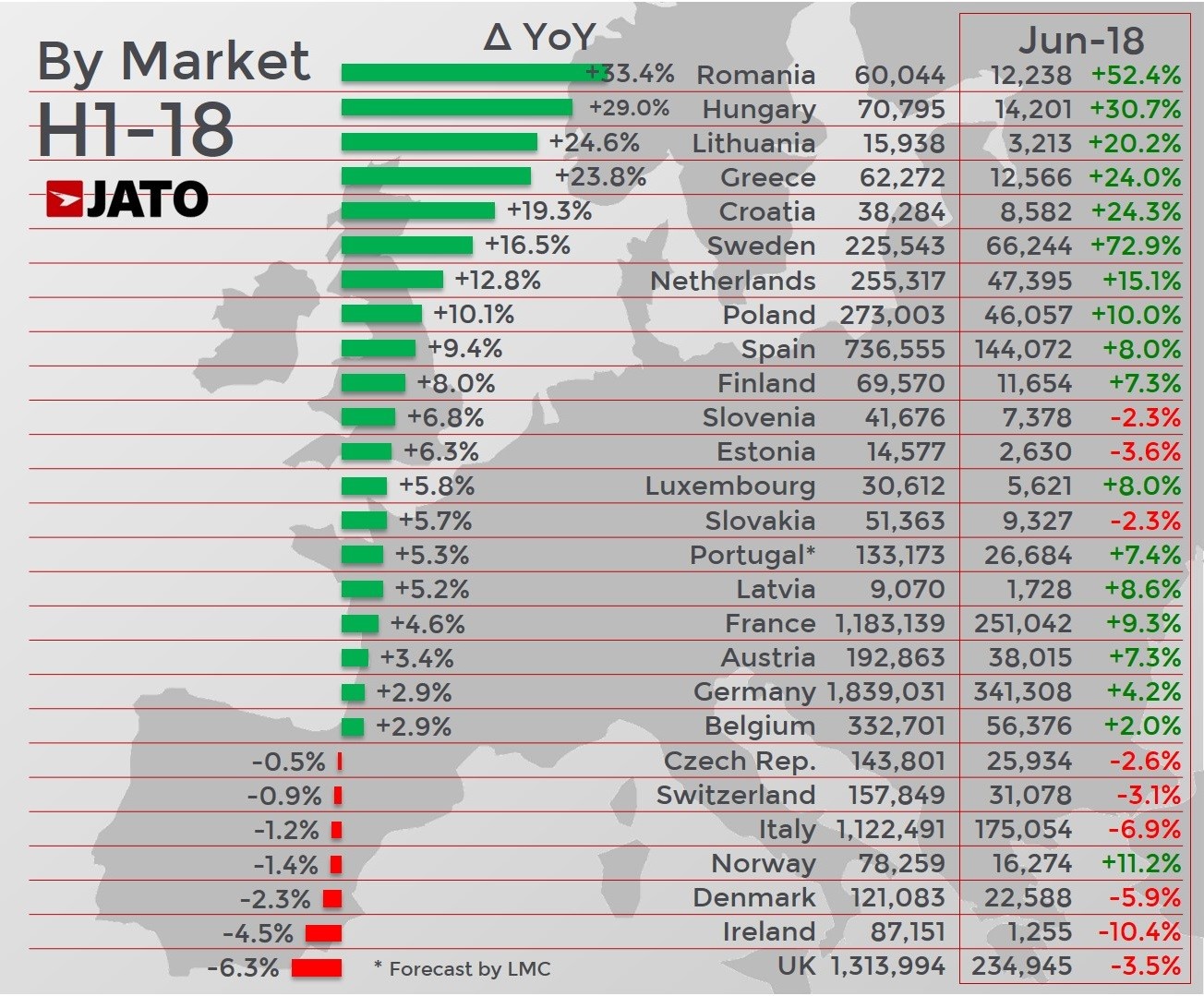 Alternative Fuelled Vehicles performed well, as electrics, hybrids and plug-ins posted an increase of 31% and recorded 450,200 registrations, making up 5.4% of total registrations. They accounted for 56% of the total market in Norway, 13% in Finland and 11% in Sweden. However, AFVs only made up 3.4% of the German market.

There were 2.92 million SUV registrations in H1 2018, a result that marks the best-ever performance for the segment in Europe.

SUVs grew by 24% in H1 and by 30% in June, signifying that the boom won’t be slowing down anytime soon.

Most of the growth in H1 was driven by the small SUV sub-segment, which saw a

Consumers continued to shift towards SUVs at the expense of traditional cars, as registrations for cars (ranging from city-cars to luxury cars) fell by almost 4% to 4.85 million. Subcompacts recorded the highest volume with 1.77 million registrations, but this was still a year on year decline of 2%.

Meanwhile compacts recorded 1.55 million registrations but recorded a decline of 5%. However, the biggest victim of the SUV boom was the MPV segment, which saw registrations down by 23% to just 532,600 – one of the lowest results of the last ten years.

Munoz said: “The VW Group is making the most of the positive landscape created by SUVs. Although the VW brand arrived late to the segment, the impressive and large array of SUVs they are offering the market is paying off.

"As expected, the T-Roc is hugely successful and is fast becoming one of the top-selling cars in Europe. VW’s other brands are also performing well due to their SUV ranges, meaning that SUVs rescued VW Group from the diesel crisis."

Meanwhile, PSA recorded only moderate growth, due to the negative results posted by Opel/Vauxhall, which saw a 6% decline during the first six months of the year. As was the case with VW Group, SUVs drove growth for PSA, with volume up by 62%, compared to a 6% decline for subcompacts and 21% decline for compacts.

Renault-Nissan was the third best-selling car maker in Europe, but lost market share due to stagnating registrations within the Renault and Nissan brands. However, they were boosted by the Dacia range, of which the new Duster and Sandero models performed well. It was the first time that Renault-Nissan didn’t lead the SUV ranking, losing out on the top spot to VW Group.

Despite being launched in 2011, the current generation of Volkswagen Golf continued to be Europe’s top-selling model and increased its registrations by 9%. Although there was a 26% drop in the Golf’s diesel registrations, this was offset by a 29% increase in its gasoline registrations. It also recorded more registrations of its alternative fuel types, which counted for 6% of its total volume. The Golf was the top-selling car in Germany, Austria, Luxembourg, Latvia and Belgium.

The Nissan Qashqai continued to perform well, as it climbed one spot to enter the top five best-selling models and maintained its position as the best-selling SUV in Europe. However, its registrations fell by 1% while its closest rival, the Tiguan (excluding Allspace), grew by 1% and was just 5,300 registrations behind.

The Captur was the top-selling small SUV with 121,200 registrations – ahead of both the Peugeot 2008 and Dacia Duster.

The most improved performance came from the Peugeot 3008, while the new Duster, Ford Ecosport, Mercedes GLC, Opel/Vauxhall Insignia and Toyota Yaris all continued to grow as well.

The Volkswagen T-Roc was the standout among the newest launches, recording 71,000 registrations and becoming the 32nd best-selling car in Europe. It was also a positive first half for the Citroen C3 Aircross, Opel/Vauxhall Crossland, Seat Arona, Skoda Karoq and Jeep Compass. 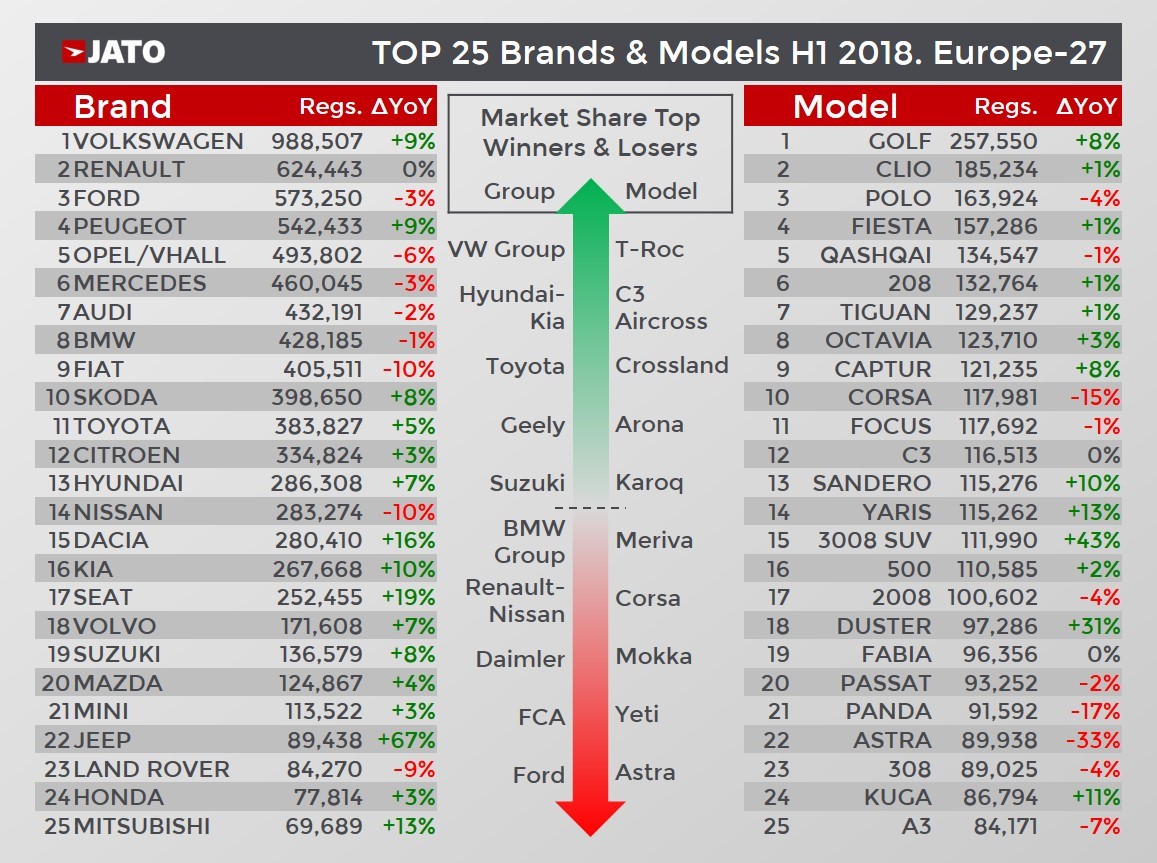