Strong manufacturer support for new car offers ahead of the September introduction of WLTP and RDE emissions and fuel consumption tests has generated a 1.2% rise in registrations during July.

Diesel sales continued to falter, falling by 24.4%, but 163,898 new cars joined British roads during the month as demand for petrol vehicles rose by 20.1% and hybrid and plug-in vehicles demand rose by a fifth.

Sue Robinson, director of the National Franchised Dealers Association, was in no doubt that July's strong showing had resulted from a manufacturer push on vehicle stock tested under the previous NEDC regime. She said: “With the introduction of Worldwide Light Vehicles Test Procedure (WLTP) in September 2018, we expect a strong month for new and nearly new sales vehicle sales in August as consumers will have the opportunity to find good deals in the sector.

“It is important to consider that a number of factors such as WLTP and VED have been affecting the market this year and will continue to do so over the next few months.

“We now look forward to a stronger than usual performance next month.”

AFVs enjoyed an uplift of 21% during July, with market share of hybrids and plug-ins reaching a record 6.5%.

Growth was particularly strong for plug-in hybrids, the SMMT said, where registrations rose by 33.5%, while hybrid registrations grew 17.5%, followed by battery electric cars, up 2.4%. 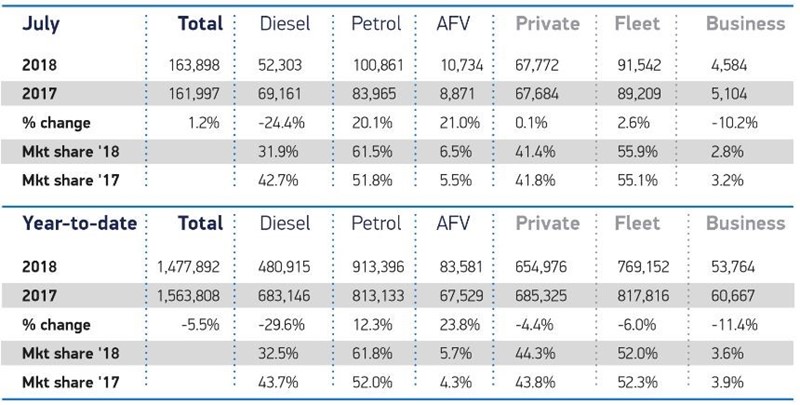 Year to date, the market remains down by 5.5% but Society of Motor Manufacturers and Traders (SMMT) chief executive Mikes Hawes was clearly buoyed by the growth experienced by the UK’s franchised dealer networks.

“The feel-good factor from a sun and sport-packed July, combined with some fantastic deals on a raft of exciting new models, clearly helped keep showrooms relatively busy last month,” he said.

Hawes added: “It’s great to see alternatively fuelled vehicles benefiting from this growth, and government’s acknowledgement of the vital role new-tech diesel will play in its Road to Zero strategy should help more even more motorists benefit from the latest, safest and low emission technology over the coming months.”

While registrations saw a rise overall, with diesel sales remaining the key area of shift in the market, a change in the buying habits of small fleet operators was also apparent during July.

Registrations by businesses with fleets of 25 cars or fewer fell by 10.2% as demand from private buyers was up by a nominal 0.1% on the same month in 2017.

Auto Trader director Ian Plummer joined Robinson in asserting that July’s increased registrations were an early sign that manufacturers' efforts to feed NEDC-tested vehicles into the market through a variety of promotional offers ahead of the arrival of new WLTP and RDE emissions and fuel economy test legislation on September 1.

Plummer said: “Several Manufacturers were selling a large proportion of their July volume on the last day of the month as the pressure to meet monthly targets and the impact of new WLTP (Worldwide Harmonised Light Vehicle Test Procedure) regulations combined to give motorists some real bargains.

“Premium brands were better able to weather current market conditions than the volume players who are feeling the impact of lower exchange rates and weaker residual values.

“Some smaller but well-positioned brands like Suzuki and Seat are bucking the trend on the back of refreshed product line-ups, as well as consumer incentives that are both simple and attractive.”

Nissan, Infiniti and DS Automobiles were among the worst performers in the July registration data from the SMMT, however.

Nissan's registrations fell by 35.5% (to 6,313), its premium brand partnert Infiniti falling 91.76% with just 28 registrations during the month.

In the month that saw the DS Automobiles brand officially become a seperate retailing entity to the PSA Group's Citroen franchise, meanwhile, it recorded just 216 registrations as its registrations for the month fell 58.7% for July. 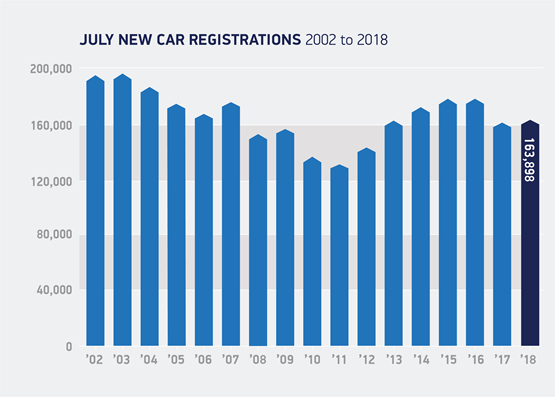 UK new car registrations down 3.5% in June with a flat retail market

UK new car registrations down 3.5% in June with a flat retail market