New car registrations declined 3% in November as the effects of the WLTP emissions test regime and falling consumer confidence conspired to affect supply, according to the SMMT.

The Society of Motor Manufacturers and Traders (SMMT) revealed in figures published this morning that a total of 158,639 units were registered last month, with growth in petrol and alternatively fuelled vehicles (AFVSs) failing to offset further fall in diesel demand.

Demand for petrol and AFVs rose by 3.5% and 24.6% respectively during November as sales of diesel cars declined by a further 16.7%, it said.

“The good news is that, as supply constraints ease, and new exciting models come on sale in the months ahead, buyers can look forward to a wide choice of cutting-edge petrol, diesel and electrified cars.

“It’s now critical that a Brexit deal is secured to boost consumer confidence and provide a stimulus to the new car market as we enter the New Year.”

The SMMT said that fleet and private registrations had declined by 0.7% and 6.4%.

The SMMT said that this was “in-line with industry expectations given current challenging conditions”. 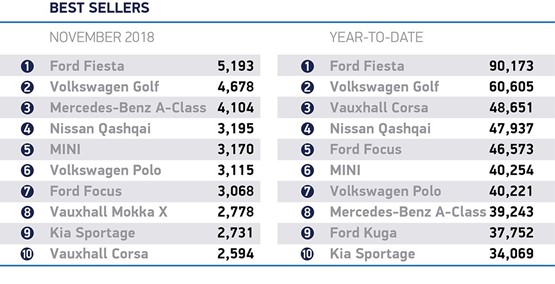 Commenting on the month’s registrations, Sue Robinson, director of the National Franchised Dealers Association (NFDA), said: “Going forward, when short-term challenges are overcome, the market is expected to see the positive impacts.

“The trend in pure electric and plug-in vehicles sales is encouraging. Consumer appetite is increasing and, as supply improves, we expect electric vehicle (EV) market share to continue to grow.

Auto Trader director, Ian Plummer, described the market forces which continued to play during a part in registrations volumes during November as “a perfect storm of unforeseen challenges”.

He added: “This is placing huge pressure on December, which as car retailers know only too well, is the most challenging month of the year to convert sales, even without the current economic and political anxieties.

“It means brands will either have to reduce their network targets, leave their retailers to take the financial hit of missing targets, or make their cars especially attractive with very strong consumer offers to significantly accelerate sales in the last days of the year.

Andrew Hooks, chief operating officer of carwow, said: “The bright spot in what is not traditionally a strong time of year was Black Friday.

“The participation of large numbers of manufacturers and dealerships in special, limited time offers drove a huge amount of interest among consumers and resulted in a sales week not far from a typical end of March / end of September.

“This has helped offset another tough period of trading for the industry. The motoring industry is  still not through the effects of WLTP on new car sales and as Brexit gets closer its effects are becoming more noticeable.”