New car registrations declined by 1.6% despite a 2.9% increase in the number of private buyers starting 2019 with the purchase of a new vehicle.

The Society of Motor Manufacturer and Traders’ (SMMT) monthly report on the sector showed that a total of 161,013 new cars were registered in the UK last month.

But while private buyers returned to showrooms, accounting for the registration of 71,378 models, demand from business and fleet buyers fell by 33.5% and 3.4% respectively, indicating that government policy regarding emission-based taxes could be to blame for a market which continues to falter.

National Franchised Dealers Association (NFDA) director, Sue Robinson, said that it was “encouraging to see that demand from private consumers grew by 2.9%", but urged goverment to consider the effects of its policies on the sector.

She said: “The retail automotive industry is flexible and resilient, but we urge the Government to provide clarity to businesses and consumers as soon as possible.”

“This, however, is still the fifth consecutive month of overall decline in the market.

"To restore momentum, we need supportive policies, not least on vehicle taxation, to encourage buyers to invest in new, cleaner vehicles that best suit their driving needs – from the latest petrols and diesels to an ever growing range of exciting electrified vehicles.

A rise in registratioins of 26.3%, resulting in a total 6.8% market share, supported the SMMT’s latest forecast for this sector, which suggested that AFVs could rise more than a quarter by the end of 2019 to around 177,000 units.

“Some 86,000 of these cars are set to be ultra low emission plug-in hybrids and battery electrics – taking plug-in market share to around 3.7% as an ever-increasing number of models come on sale”, it said.

Petrol demand also grew by 7.3% in January, but this was not enough to offset another month of decline for diesel, as registrations fell by 20.3%. 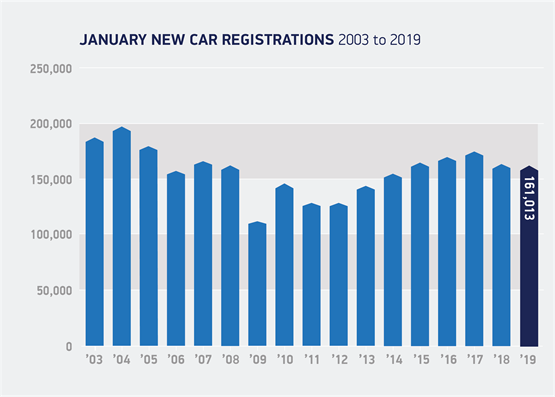 Commenting on the SMMT’s latest registration findings, Auto Trader director Ian Plummer, said: “Despite the Worldwide Harmonised Light Vehicle Test Procedure (WLTP) coming into force five months ago, there is every indication that many brands are still struggling to get the much-needed compliant stock to the frontline, placing real strain on retailers.

“However, we can see for some brands, such as Volvo and some of the Korean and Japanese marques, supply seems to be in good shape and has helped them to record a great start to the year.

“With the realities of Brexit edging ever closer, it’s even more important than usual for the industry to get a strong Q1 under their belt to futureproof against any eventuality.”

Andrew Hooks, chief operating officer at carwow, said: “Despite the approaching feeling of Brexit uncertainty, the first quarter of 2019 is actually shaping up to be a very strong one for the industry - as drivers realise this is a good time to buy a new car.

“January saw the industry taking the lead and leaving a disappointing 2018 behind them, with most major manufacturers putting on limited-time offers.

“The number of private buyers rose as a result in January - in fact, despite the supposed gloom, carwow industry partners enjoyed their busiest single day and week of trading on the website. On January 18th, the carwow site peaked with 15% more traffic than we’ve ever handled in a single day before.”