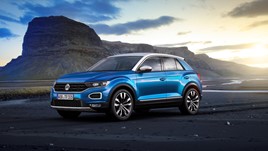 Europe experienced its fifth consecutive month of new car sales decline during January, but still managed to register the month’s highest volumes for a decade.

A total of 1.22 million vehicles were registered in January 2019, as volume dropped by 4.6% year-on-year in what was the first January decline since 2013 as all but five of the region’s 27 market experienced a fall in sales.

Results collated on a monthly basis by Jato Dynamics revealed that only Romania, Hungary, Denmark, Portugal and Greece recording growth. 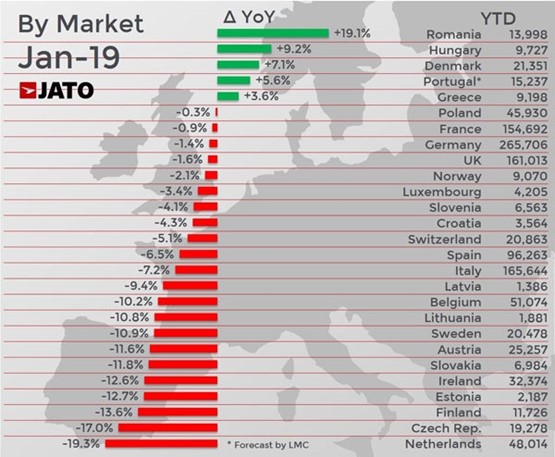 These are all small markets and not big enough in size to offset drops in the big five markets, or double-digit falls in midsize markets like the Netherlands, Belgium and Czech Republic, it said.

In total, 18 countries experienced larger percentage declines than the UK, with Italy’s 7.2% dip being marking it out as the only nation to exceed its dip by volume.

Diesel sales continued to decline, with volumes down by 18% in January as vehicles powered by the fuel accounted for just 33% of total registrations.

In Italy diesel volumes were down by 30%, meaning the country lost its title of being the biggest market for diesels, Jato reported.

Petrol vehicles counted for 58% of total registrations across Europe, as volumes increased by 2.1% - up almost 4ppts on January 2018.

Commenting on the steady growth in adoption of alternative fuel vehicles (AFV), Jato said that AFV registrations had grown by 22% in January and counted for 7.1% of the total market.

Battery electric vehicles (BEV) were responsible for driving this growth, with registrations almost doubling from 10,200 in January 2018 to 19,600 last month, it said, adding: “The BEV boom wouldn’t have been possible without the outstanding results of the Renault Zoe (the top-selling BEV in Europe), Nissan Leaf and Hyundai Kona.

Although SUV registrations continued to grow, there was a significant slowdown to just 6.1%, but the introduction of 14 new models over the course of 2018 could be attributed for the segments larger impact on last year’s market.

Small SUV volumes were up 13%, however, as the Volkswagen T-Roc led the subsegment for the first time.

Volkswagen Group continued to lead the market, despite their market share falling from 24.6% in January 2018 to 24.2% last month.

The German car maker was negatively affected by big declines at Audi and Porsche as Seat and Lamborghini were the only brands to grow.

For the first time, Volkswagen Group sold more SUVs than any other type of car and was the overall top-selling SUV maker during the month. 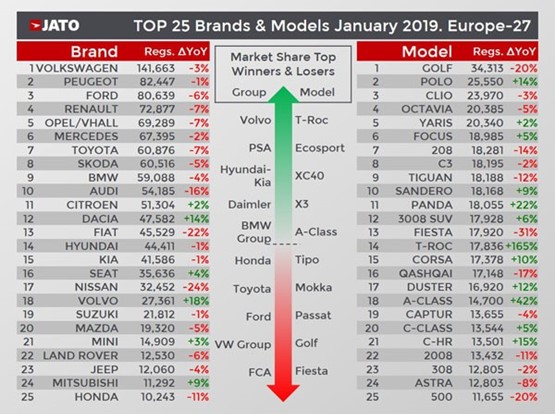 The PSA Group was the second biggest car maker during January, as volume fell by just 2% to 206,100 registrations, equivalent to just 90,000 less than VW Group.

Opel/Vauxhall continued to fall in the rankings, mostly due to growing competition for the Mokka SUV.

Jato attributed FCA’s performance to “the effects of having an aging range, which even resulted in difficulties in its home market of Italy, where it posted the lowest January market share of the last 20 years”.

Jato said that similar effects were being felt by Dacia. The gap between Dacia and Nissan continued to grow, as the former grew by 14%, while the latter fell by 24%.

Ford also felt the impact of a challenging January, as volumes dropped by 16% in France, 15% in the UK and 11% in Italy.

That story differed in Germany, where the brands volumes were up by 15% to 21,100 registrations, as the country became Ford’s largest market in Europe.

The Ford Ecosport excelled, with volume up by a huge 166%, while the Fiesta saw a 31% decline.

Volkswagen’s Golf was once again Europe’s top-selling model despite a 20% decline in registrations.

This was due to a 26% decline in its gasoline registrations, according to Jato.

Volkswagen’s Polo was the best performer in the top 10, recording a 14% growth in volume, thanks to boosts in Germany, the UK and France.

Elsewhere, the Volkswagen Tiguan was the best-selling SUV, despite posting a 12% drop and facing growing competition from its competitor, the Peugeot 3008, which was up by 6%.

The Nissan Qashqai, Europe’s top-selling SUV in 2018, fell by 17% overall as its diesel registrations fell by 28%.