Diesel cars dropped to just 30% of the sales mix, with petrol cars taking a 65% share and the remainder being alternative fuelled vehicles (AFVs) such as hybrids and pure electric cars.

The Society of Motor Manufacturers and Traders noted it has been the 22nd consecutive month of sales growth for AFVs.

There are already around 40 plug-in hybrid cars in the UK market, with another 20 expected to launch during 2019, said the SMMT.

“These cars still only account for a fraction of the overall market, however, so if the UK is to achieve its electrification ambitions, a world-class package of incentives and infrastructure is needed.

“The recent removal of the plug-in car grant from plug-in hybrids was a backward step and sends entirely the wrong message. Supportive, not punitive measures are needed, else ambitions will never be realised.” 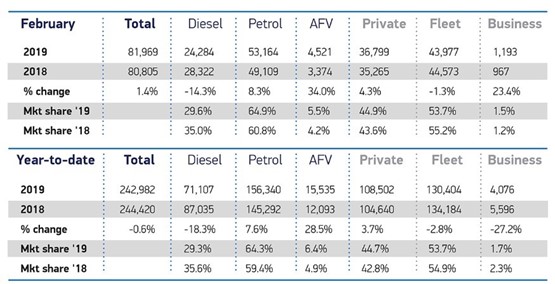 “This suggests that removing the incentive for PHEVs is having an adverse effect,” it added.