August delivered evidence of significant pre-registration driven by the requirement for market share and the need to register WLTP cars in the face of the arrival of RDE2 legislation.

But as registrations were buoyed by the continuation of manufacturer push in what is normally one of the year’s quieter months, used car vales continued to decline as a degree opf market apathy creeps in among consumers, Cazana’s director of insight, Rupert Pontin, writes in his latest monthly market update.

If the new car market has been challenging in August, then the used car market can be judged to have been harder for the majority.

The question is, what have been the real drivers behind market apathy, and it is retail driven data that provides invaluable insight to the industry to be able to identify key considerations and the direct impact on dealer sales.

The current political and economic situation has moved from bad to worse in recent weeks and this is a significant factor in the consumer purchase consideration process. The data below - delivered by Trading Economics - gives an insight into consumer confidence over the past 12 months:

It is clear from this chart that the UK consumer is feeling very uncomfortable at this particular point in time.

This has not necessarily impacted on the desire to buy a car, but it has affected the willingness to commit and therefore the time it takes to sell a car has increased.

With political events moving so quickly and controversially it is impossible to be completely relevant in describing the economic position as this is press release is published.

Suffice to say, a “no deal” Brexit is now legally impossible and this, unfortunately, puts the country and the consumer back to a position of not understanding what the eventual outcome will be.

As clarification of the current used car market performance, the following chart shows the comparison at key age and mileage profiles against the same period over the last three years: 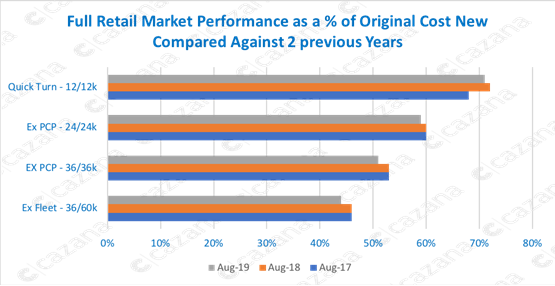 This chart shows a realistic picture of what should be happening in a normal to stressed used car market.

The data shows that whatever the age and mileage profile, retail pricing is now falling away.

Of note is the fact that the later plate cars seem to be holding value slightly better and have dipped in pricing terms by a single percentage point of original cost new.

Three-year-old cars from both the private and fleet sector are being affected more severely.

This will in part be due to the level of new car registrations that took place in the new car market three-years-ago.

It is also important to note that whilst retail pricing is reasonably steady, the compromise has been in how long it has taken to sell each car.

This is the difficult piece at the moment where the sales teams are having to demonstrate extra justification and greater value for the customer into each deal.

The reality is that it may not be worth dropping the retail price if all the dealers are facing the same situation as this does not guarantee a quicker sale.

Tenacity and resilience may be the correct approach.

The final glance at the used car market this month is a view of what is happening with the pricing of hybrid and electric vehicles (EV).

The new car market for diesels is still contracting and hybrid and specifically electric vehicles appear to be the flavour of the month.

The question is whether that is being replicated to quite the same degree in the used market.

The following chart looks at the performance of used diesel cars at key age and mileage profiles as a percentage of original cost new:

This chart is fascinating as it highlights the current advantage of working with retail-driven insight.

Both these propulsion types are in fairly low volumes in the used car market and as such wholesale driven pricing is largely just an exercise in subjective value creation.

Firstly, the data here highlights the instability of the two and three-year-old BEV market.

This is seen by virtue of the fact that the pricing is very similar from November 2018 onwards despite a year’s difference in age.

This is likely due to the improvements in specification over time but more importantly the driving range.

Looking at the hybrid data and it is evident that there is greater pricing stability as all lines remain fairly flat across the twelve-month period.

There is also a consistent gap between the value of each age and mileage profile which is similar to the pattern exhibited by internal combustion engine (ICE) cars.

Finally, there has also been consistent retail price increases at all age and mileage profiles which supports the view that consumer demand for alternative fuel vehicles is increasing.

To summarise, August has been another bumpy month for both new and used car sales in the UK.

This time of year may traditionally be more difficult from a sales perspective but the political and associated economic challenges are an unwelcome complication.

As it stands today this position looks set to continue until early 2020.

Indeed, we may see another general election and new prime minister coming to the fore to conclude the Brexit process in the coming months and as such stability and recovery seems quite a way away.