While consumer confidence seems to have improved during the key number plate change month of September efforts to prop up ailing new car sales seem to be hampering parts of the used car market.

In his monthly used car market report, Cazana’s director of insight, Rupert Pontin welcomed the uplift in public sentiment, which he said could be a delayed response to the election of current Prime Minister, Boris Johnson, or because the country is now legally not allowed to leave the EU without a deal.

But while he said that used car retailers may have experienced an increase in the number of customer enquiries and an improvement in footfall during September, there remained many challenges for the sector to contemplate. Read on for more of Pontin’s analysis:

With an increase in footfall and demand, deals have been slightly easier to close although there is still some way to go before the used car market could be described as good again.

What is of significant note is the change in the shape of the stock that is on sale and the impact that this has had on the retail pricing and as such the shape of the wholesale market and the demand and remarketing required to keep stock moving and maintain a sensible return on the asset value.

The chart below shows the performance of retail pricing on the used car market at key age and mileage profiles against the same period over the last three years: 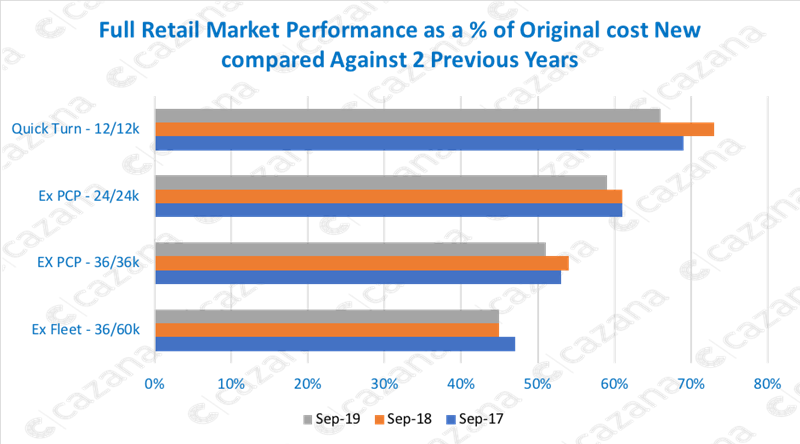 This chart makes it immediately clear that the UK used car market has seen a significant shift in pricing in the sub 12-month-old sector.

Retail pricing has seen a marked decrease with a 7ppt downturn over the same period last year.

This is entirely due to the impact of pre-registration in recent months with significant impact evident during September as these cars forced into the market have had to be competitive with brand new cars when advertised for retail sale.

There is no doubt that this is a serious event for this market profile to experience.

This drop is likely due to such a heavy move in the sub 12 months sector although it is important to acknowledge that at this point there is pricing stability for ex fleet 36-month-old vehicles with the higher 60,000-mile profile.

Given the severity of the pricing decline in the sub 12 month sector the chart below looks at this age profile in more detail:

This chart highlights the current advantage of working with real-time retail driven insight.

The chart adds more context to the previous data by showing that it is the petrol-powered cars that have suffered so heavily in pricing terms.

Since September 2018 petrol propulsion pricing in this key age and mileage profile has been on a gentle decline but the September profile highlights a 14ppt decline over the same period last year and 9ppts since August 2019.

This implies not only greater pre-registration but also increased change of perhaps rental fleets or manufacturer car schemes and demo fleets.

This will have been done to clearing cars with less clean emissions and engine technology than new legislation allows.

It also lends credence to the commentary suggesting that consumers don’t have the desire for higher priced larger engine petrol cars that the manufacturers “think” they want.

In summary, this month’s retail data has highlighted the impact of the government legislative changes on the UK automotive industry.

The need to keep cars moving has had a very serious impact on the sub 12-month-old profile and arguably led to a reduction in pricing for older lower mileage used cars.

It will be interesting to see how this may impact on the UK and European markets in the coming months.