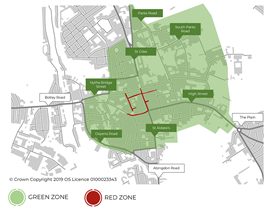 The ZEZ will ban all petrol and diesel powered vehicles from entering the heart of the city while the rest of the city centre would be accessed for free by zero emission vehicles with discounted charges for vehicles which comply with the London Ultra Low Emission Zone standards.

A December 2020 implementation has been mapped out by the proposed scheme, which is now the subject of an informal consultation.

The move was first muted in 2017 and car retailers in and around the city should have been gearing-up their plans to embrace a potential electric vehicle (EV) sales opportunity in light of the news.

Last month Google analysis carried out by automotive search marketing specialist Honchō highlighted how retailers in and around London should look to highlight vehicles' exemption from the London Ultra Low Emissions Zone (ULEZ) in their conversations with customers, both online and in the dealership.

It found that the term “ULEZ” is being used in significantly more online searches than 12 months ago from potential car buyers in the Greater London area, with “ULEZ checker” seeing a year-on-year average monthly increase from just 5,310 to 60,110 searches and “ULEZ car checker” and “ULEZ exempt cars” also featuring regularly.

AM’s sister title, Fleet News, today (January 8) reported that the proposed Oxford scheme’s ZEZ, or ‘Red Zone’, will be enforced between 7am and 7pm, with a £10 charge for non-compliant vehicles entering the zone.

Discounts for all blue badge holders entering the zone will be in place until December 2024.

There will be a 90% discount for residents living in the zone until December 2030, Fleet News reported.

“Our two councils have taken a fresh look at the big idea of charging commuters to drive polluting vehicles in and out of the city centre. And we’re listening to Oxford’s Citizens’ Assembly on Climate Change by speeding up our journey to a city-wide Zero Emission Zone.”

Informal consultation on the Red Zone is now open until January 31, with the councils looking for feedback on: the level the charges are set at, whether the discounts are appropriate, the suggested hours of operation for the charging scheme, what future phases of the Zero Emission Zone should include, and when they should be implemented.

The Red Zone will then go to formal consultation in March, and the draft charging order published, with both councils making a formal decision on implementation in the spring, which could mean the scheme coming into effect in December 2020.