As car manufacturers attempt to mitigate the impact of stringent EU emissions regulations which mandate a €95 fine per-gram above the new 2020/21 CO2 limit of 95g/km, per vehicle sold, the automotive sector data specialist’s global analyst, Felipe Munoz, said that the first month of this year had marked “another month of transition for the complex new car market”.

Sales volumes declined to 1,138,057 as the effects of a flurry of last-minute purchases of more emitting vehicles made in December, due to the impending introduction of the new CO2 emissions regulation, were felt by retailers.

Despite this, the month still generated the fourth biggest registration volumes of the past decade, according to Jato.

And Munoz said: “The European market is still showing signs of strength despite a tough environment.

“We believe that the market is capable of adapting to meet new regulations and impending challenges.

“This is exemplified by the increase of EV registrations, which was a lifeline for many OEMs in January. Only two years ago not many in the industry would have predicted such high levels of demand for EVs.”

Last month Jato reported that vehicle CO2 emissions had risen across Europe for a third consecutive year as the pace of electric vehicle (EV) adoption failed to counteract the impact of falling diesel sales and the rise of SUVs.

Electric vehicles (EV), hybrids and plug-in hybrids posted a record in volume and market share during January, however, as they became the European new car market’s only driver of growth in January.

Jato said that increasing incentives for consumers, greater awareness about the benefits of EVs and the growing concern about diesel and petrol cars was the trigger for the shift.

Other AFVs also generated market share growth, with hybrid registrations up 36%, EVs by 91% and plug-in hybrids (PHEV) by 173%.

Jato noted that January was the first time that hybrids had counted for less than half of total AFV registrations, however, a shift which followed the UK Government’s decision to include hybrids and PHEVs in plans for its 2035 ban on the sale of new petrol and diesel vehicles.

The Society of Motor Manufacturers and Traders (SMMT) last week called on Government to back-up its apparent push towards pure EVs by removing VAT from the sale of such vehicles, in an attempt to achieve price parity with their conventionally-powered equivalents.

In January, AFVs made up 77% of total car registrations in Norway, 38% in Sweden and 28% in Finland.

Munoz said: “Europe demonstrated that the widespread adoption of EVs is increasingly feasible, and will become a likely reality once the cars become more affordable.”

According to Jato’s market data, SUVs continued to increase their market share in January – despite the growth in AFVs – due to the drop in overall vehicle sales in January.

Only 14% of all SUV registrations in January were powered by electrified drivetrains, whereas 28% of luxury sedans were HEV, PHEV or BEV.

“SUVs continue to gain traction. However, manufacturers need to produce more EV models if they want to keep up the momentum of growth moving forward,” said Munoz. 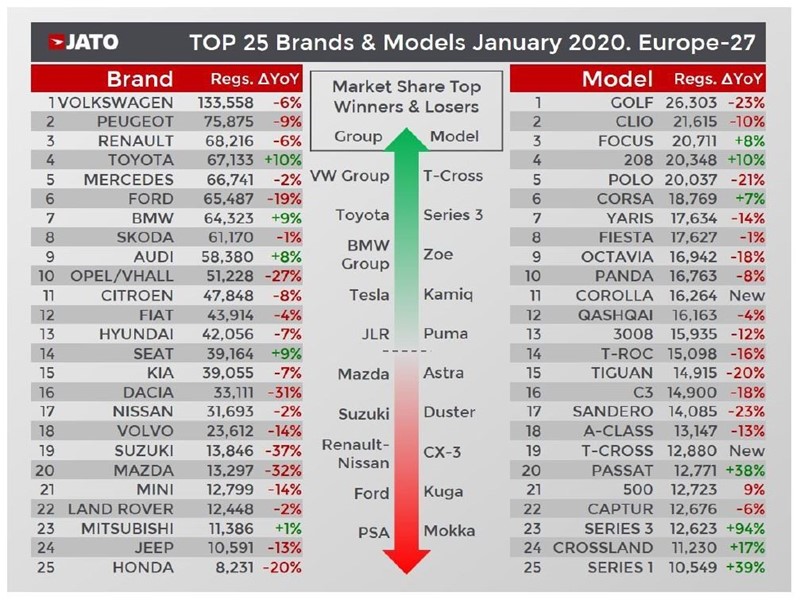