A manufacturer-led rush to clear their stocks of vehicles with high CO2 emissions levels contributed to a 21% increase in new car registrations across Europe in December, JATO Dynamics has claimed.

The market analyst said that the roll-out of new EU legislation which dictates a 95g/km CO2 emissions target for OEM fleets in 2020/21 triggered a mass pre-registration of vehicles in the last month of 2019 in order to make way for a new crop of cleaner product.

The new EU legislation - phased in during 2020 ahead of a full 2021 implimentation - will see OEMs forced pay an excess emissions premium for each car registered of €95 for each g/km of CO2 over the target.

In total 1,258,412 new cars were sold across the 27 markets analysed by JATO during the month as part of an “artificial spike”, which resulted in the highest December registrations total on record and left the region’s full-year 2019 volumes up 1.1% at 15.76 million.

JATO’s reported stated: “Monthly growth levels have not been this high since August 2018, when the impact of the WLTP regulation caused an artificial spike.

“Similarly to August 2018, December’s growth can be explained by looking at new regulations impacting the industry.

Felipe Munoz, JATO’s global analyst, said that December’s pre-registrations rush had caused the volume-weighted average CO2 emissions of Europe’s largest five markets through October 2019 to total 122.5 g/km – 1.2 g/km higher than the result for the whole of 2018.

“The December registrations are an indication of the ongoing regulatory challenges facing car makers in the year ahead,” he added.

New car registrations increased in all countries except Norway and Lithuania during December, with 23 of the 27 markets analysed recording double-digit growth.

Munoz said: “The growth is most likely due to self-registrations from those hoping to resell the units as second hand in 2020.

“In Finland, the former volume increased by 40% while the latter recorded only 3% growth.”

Despite Munoz’s assertions related to the motivation behind large sales figures in December, JATO found that electrified vehicles emerged a big winner in December with demand soaring by 69% – equating to 132,200 units or 11% market share.

The Tesla Model 3 became the third best-selling model in the entire European market as 22,100 units were sold during the month, outselling other popular cars like the Volkswagen Polo, Peugeot 208, Nissan Qashqai and Skoda Octavia.

Its volume made up 43% of the pure electric vehicle (EV) registrations.

JATO said that there were 4.6 diesel cars for every EV sold during December, 2018. A year later that ratio has fallen to 2.9 with most of this progress due to the rise of EVs, which outsold hybrid vehicles for the first time.

Munoz said: “As expected, Tesla continues to have an enormous impact on registrations at the end of each quarter and the Model 3 has put sedans back in the spotlight.

“The question is whether this trend is sustainable, or will electric SUVs hinder the popularity of Tesla Model 3 in the coming months?”

SUVs continued their strong performance in December with 524,500 units registered – 42% of the region’s total volume – as all SUVs posted double-digit growth in December.

Volkswagen Group saw the biggest rise in SUV sales, with a 72% increase in registrations during the month. The German manufacturer holds 22% of the segment and has three SUVs in the top 10.

SUVs’ December 2019 registrations total was 42% higher than the total recorded in December 2018, according to JATO, with their market share having jumped from 22% in December 2014 to 42% last month.

Elewhere, the BMW 3-Series grew its volumes by 127%, the Suzuki Vitara by 133% and Smart Fortwo by 174% as the Daimler-owned compact car range looks to complete its transition to becoming a pure EV brand. 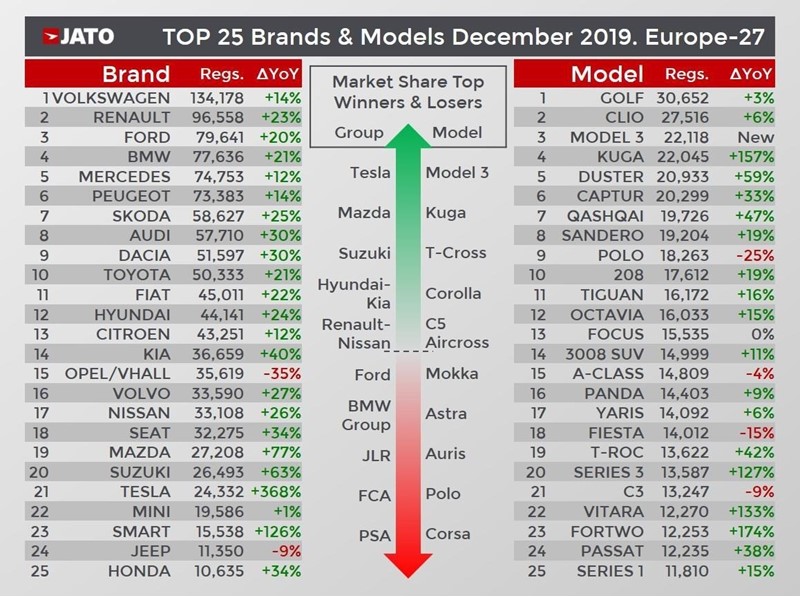