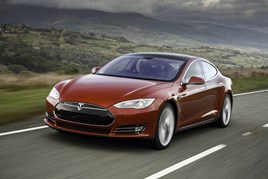 A new study into the buying habits of electric vehicle (EV) drivers has found that less than half bought one for the environmental benefits and only a third describe themselves as environmentally conscious.

Carwow surveyed 2,000 people to find out who the early adopters of EVs were.

It found that EVs are most likely to be owned by vegan males aged 30+, living in London and earning more than £60,000 per year.

Men emerged as most likely to already be behind the wheel of an electric car - 21% of males vs. 7% of females, while those aged 25-34 were found to be the earliest adopters (25%).

Intent to buy an EV was highest in men under 25, with more than half looking to make their next car electric or hybrid - the highest of any of the age groups.

Less than half (46%) of AFV owners indicated that ‘environmental factors’ played a part in their decision to purchase the vehicle, with a third (34%) saying technology was the biggest attraction.

An aesthetically focused 33% admitted the way the vehicles look played a big role.

That said, 42% of those polled pragmatically predicted it would work out cheaper in the long run.

The study also looked into other lifestyle choices to see if those driving an environmental conscious car were most likely to be green in other ways. Only 35% of AFV owners described themselves as ‘environmentally conscious’, compared to 53% of non AFV drivers that are considering a purchase in the future, holding true to the notion that the first electric buyers were more keen to be seen as early adopters of the new technology as opposed to making the right choice for the planet.

Results indicated that AFV owners are twice as likely to have voted remain in the EU referendum, more likely to follow vegan/vegetarian and are the least likely to use public transport.

Vix Leyton, consumer expert at Carwow, said: “When they were first brought to market, electric cars were undeniably more accessible to those who had money to invest and, our research shows, outside of those willing to pay a ‘green premium’ to make their contribution to the environment, they were most attractive to image-conscious consumers wanting to be the first to showcase the technology.

“Understandably, many drivers may have been waiting for the technology to stabilise and the charging infrastructure to be a lot more robust. The good news for those hoping to look at alternative fuels for their next car, the range has massively increased, and there are many more affordable options available. In tandem with this, significant investment is being made into charging infrastructure so anyone with ‘range anxiety’ worrying they will be left stranded should be able to make their journeys with confidence, although there is still a lot to be done for it to be ready for everyone to make the big switch.”