The new and used car finance markets returned to growth in July as showrooms across the UK re-opened their doors following the COVID-19 lockdown period, the Finance and Leasing Association (FLA) has confirmed.

In-line with the Society of Motor Manufacturers and Traders (SMMT) data which illustrated car buyers’ return to the market with an 11.3% July increase in new car sales, the FLA said that new business in the consumer car finance market had completed a turnaround from an average 36% decline during the first seven months of 2020. 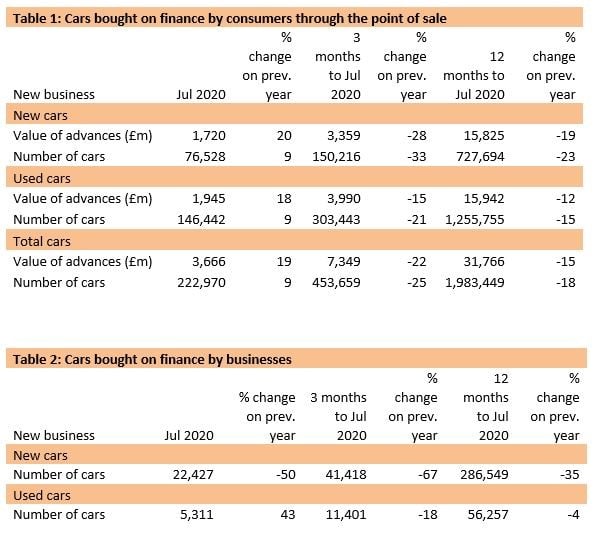 In the first seven months of 2020, new business volumes in this market were 36% lower than in the same period a year earlier.

In the first seven months of 2020, new business volumes in this market fell by 26% compared with the same period in 2019.

Kilkelly said that the pick-up in the economy since June had been “encouraging”, but added that the sustainability of the recovery remained in doubt.

In the seven months to July 2020, new business volumes in the point of sale car finance market remain 30% lower than in the same period in 2019, according to FLA data.

Re-stating the FLA’s previous calls for Government support for non-bank lenders, she said: “Our latest research suggests that new business in the consumer car finance market is likely to fall by 20% in 2020 as a whole.

“We continue to urge the Government and Bank of England to ensure that there is adequate support for all lenders so that they can meet the ongoing demand from customers for forbearance and at the same time meet demand for new credit during what will be a difficult period for the economy.”

The percentage of private new car sales financed by FLA members in the twelve months to July 2020 was 93.5%, up from 91.6% in the same period last year.