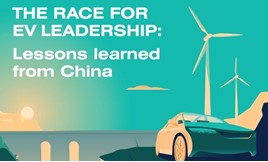 The success of China’s relentless development of new electric vehicles (EV) and charge point infrastructure has put it well ahead of the pack in the global race towards electrification, Jato Dynamics reports.

Jato’s newly-published report ‘The Race for EV Leadership: Lessons learned from China’ has spelled out how the East Asian economic giant – home to the parent companies of brands such as Volvo, Polestar and MG – has sped ahead in an all-out pursuit of market dominance.

But it also concludes that a drive from Government – with state incentives and a push towards improved infrastructure – has been central to the shift.

Jato points out in its report that Chinese car buyers currently have a choice 138 different EV models, compared to just 60 in Europe and 17 in the USA, with average retail prices 58% and 52% higher in Europe and the USA than in China after a focus on the cheap production of affordable products.

Efforts to deter consumers from petrol and diesel cars have also seen road licensing – free for EVs – rise to a cost of $13,000 in Shanghai.

Jato said that, according to data published by the IEA, the number of public slow and fast charging spots also reached 862,118 globally, with China taking a 60% share (Global EV Outlook 2020).

According to IEA data, 64% of China’s electricity is produced via coal-powered power stations, compared to around 40% in Europe.

Jato said that the race for EV dominance could yet take a new twist, however, with China now poised to cut the subsidies for carmakers that have so far boosted the shift towards EVs

Jato said: “However, beyond its internal market, China ambitions are clear – to become a global automotive superpower.

“Simultaneously, the market in Europe is starting to gain real momentum, ramping up state intervention to accelerate uptake and growth, as it races to meet carbon emission targets.

“Notwithstanding incentives, in Europe, adoption will be economic rather than regulatory, and only when parity in total cost of ownership is achieved will EVs begin to gain a significant share of new vehicle sales.

“China’s journey in becoming the largest EV market in the world in just under a decade remains living proof that the growth of EVs at pace, requires the backing of Government intervention. But as Europe’s market continues to grow, will the two giants collide?”

New SMMT analysis compiled with the help of Frost & Sullivan and published back in September revealed that spending of at least £16.7 billion was required to get the UK’s public charging network ready for mass EV market, with 507 new charge points needed every day to 2035 to drive buyer confidence.

The findings came as an SMMT survey of 2,185 UK motorists, completed by Savanta ComRes, found that almost half were not ready to switch into an alternative fuel vehicle (AFV) and that the Government’s target of a 2035 ban on the sale of internal combustion engine (ICE) cars was too soon.