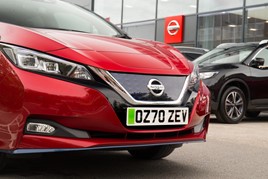 Car buying consumers are largely unaware of the green numberplates and Government's plug-in car grant (PiCG) in-place to boost the take-up of electric vehicles (EV) across the UK.

A YouGov poll commissioned by The Motor Ombudsman has revealed that 88% of UK drivers have no knowledge of the introduction of green number plates for EVs, while Honest John found that 41% of motorists remain unaware of the £3,000 EV discount scheme.

In line with Government’s ambition to achieve net zero emissions by 2050, green number plates are being introduced for EVs this autumn to allow zero emission models to be more easily identified and to help local authorities encourage people to own and drive them.

A green flash will feature on the left-hand side of the white and yellow front and rear plates to distinguish EVs from hybrids or vehicles featuring a petrol or diesel engine.

However, according to the study of 1,688 UK driving licence holders, those living in London and aged over 35 were revealed as being the least conversant with the change (92% and 88% of these groups respectively).

In contrast, those residing in the South and the East, and respondents in the 18-to-34 age group were the most up to speed in terms of the arrival of the dedicated EV plates, with around 15% of people in these groups knowing about the green flash.

However, nearly three-quarters of respondents (72%) said they would be happy to have them fitted as standard if they were considering buying an EV.

Bill Fennell, chief ombudsman and managing director at The Motor Ombudsman, said: “Electric vehicles are continuing to grow in popularity in the UK, and our study has offered a unique insight into how drivers view the latest initiatives introduced by government to encourage them to embrace pure zero emission motoring.”

The YouGov survey also found that only a quarter (29%) of individuals thought having dedicated green parking spaces for EVs would make them much more or little more inclined to buy one, with 57% being indifferent to the idea.

Fennell said: “Despite the results showing that consumer awareness of the arrival of the new green plates remains low, the findings nevertheless show a positive picture overall that drivers are happy to embrace them.

“However, when it comes to parking spaces being reserved solely for the use of EVs, it’s clear that the jury’s still out as to whether this will have any bearing on an individual’s decision to buy an electric vehicle.”

Honest John's survey of over 4,000 motorists nationally found that nearly half (41%) of motorists are unaware of the government’s flagship EV discount scheme.

The Plug-in grant offers savings of up to 35% off the purchase price of qualifying vehicles, up to a maximum of £3,000.

Dan Powell, managing editor at Honest John, said: “The government has set itself an ambitious target of banning the sale of new petrol or diesel models, possibly as soon as 2030.

“That requires a much greater uptake of electric and alternative fuel vehicles than there currently is.

“While the plug-in grant is a great way to encourage this - from our research it’s clear too few people know about it.

“The government needs to do more to get the message out there and alert car-buyers to the help that is available for them as they go green.”

The research also identified a growing appetite for alternative fuel cars (AFV) in general with 48% considering buying one next.

A quarter (24%) expressed their interest in purchasing a petrol car, while one-in-ten (10%) intend to buy a diesel vehicle.

The most popular green option is a fully electric vehicle - which is the choice of one in five (22%) - with 13% considering a hybrid while 5% are planning on purchasing a plug-in hybrid (PHEV).

At the same time, 30% said the plug-in grant would make them more likely to buy an electric vehicle.

When questioned about the barriers EV uptake, 47% said price was a barrier, alongside charging and infrastructure (38%).

Powell said: “There are a lot of myths around EVs that are very persistent, particularly around range and charging facilities.

“The average range of an electric vehicle is 180 miles while we found that the average journey motorists take is between 21 and 40 miles.

“Most motorway services now provide fast-charging services allowing you to power your vehicle up to 80% in under an hour.

“Further benefits of electric vehicles include them being exempt from congestion charges alongside the government’s home charge scheme which saves you £350 on the cost of a domestic charging point.”