Data published by the industry body this morning showed that productivity of the UK’s car manufacturing sector declined by 27.3% in January as 86,052 vehicles rolled off production lines.

The SMMT said that the result marked the worst January volume for the sector since 2009 as the financial toll of lost production attributed to the impact of the COVID-19 coronavirus pandemic reached £11.3 billion.

However, the decline in productivity has now been ongoing for 17 consecutive months, and the SMMT said that global supply chain issues, extended shutdowns and friction in the new trading arrangements following the end of the Brexit transition period, had also played their part. 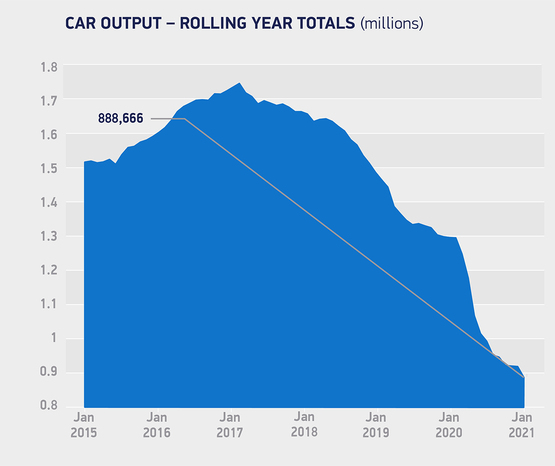 Commenting on the January car production data, Hawes said re-opening the UK’s car showrooms should be the main priority of any to boost its ailing automotive sector.

He also called on the Chancellor of the Exchequer, Rishi Sunak to support the sector with fiscal measures in next Wednesday’s Budget announcement.

“Yet another month of decline for UK car production is a grave concern and next week’s Budget is the Chancellor’s opportunity to boost the industry by introducing measures that will support competitiveness, jobs and livelihoods,” said Hawes.

The SMMT wants next week’s Budget to include an extension of COVID-19 business support schemes including the Coronavirus Job Retention Scheme (CJRS), amendments to business rates reform to incentivise manufacturing investment and more support for skills and training.

Hawes added: “Whilst there have been some very welcome recent announcements, we need to secure our medium to long-term future by creating the conditions that will attract battery gigafactory investment and transform the supply chain.

“Most immediately, however, we must get our COVID-secure car showrooms back open, ideally before 12 April. This will be the fastest way to UK automotive manufacturing recovery.”

Prime Minister Boris Johnson opened the door to an April 12 re-opening of car showrooms in his roadmap to unlock COVID-19 ‘Lockdown 3’, which was unveiled on Monday (February 22).

Following his announcement car retailers and OEMs shared their disappointment that the process could not have come sooner for car retail premises.

While the SMMT said that eight-in-10 of all cars made in UK factories are exported, the industry body is keen to boost sales with a resumption of showroom sales.

The SMMT said that his means more than one in four (25.3%) of all cars leaving factory gates was alternatively fuelled, adding that this was “further evidence of the UK’s growing capability in ultra-low and zero emission vehicle manufacturing”.