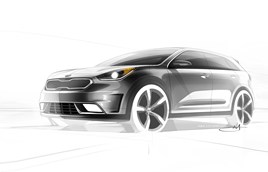 Kia  has confirmed it will launch a new hybrid compact SUV called Niro with production expected in late 2016.

The new model marks the start of development of Kia’s first dedicated eco-car platform and the South Korean brand said it will be sold “in overseas markets” with the UK likely one of those markets.

Kia says the Niro has been developed in isolation from exiting Kia models and platforms to specifically accommodate next-gen engines and “environmentally-conscious technologies”.

Hyoung-Keun Lee, vice chairman chief executive, Kia Motors Corporation, said: “Our new model is designed to offer buyers everything they could want from a compact SUV in terms of practicality and styling, while providing the typically low running costs associated with a dedicated hybrid powertrain.

“By encouraging our engineers to take a ‘blank canvas' approach, we have tried to develop a car that will appeal to a broader range of consumers.”

Kia’s engineers are targeting a sub-90g/km CO2 figure with the Niro pairing Kia’s 1.6-litre petrol with a 1.56kwh lithium-polymer battery pack and a 32kw electric motor. The hybrid drive will be mated to a six-speed double clutch transmission.

A plug-in hybrid version of the Niro will be also be available “later in its life-cycle”.

Kia is planning to expand its eco-model line-up to 11 vehicles, including hybrids, electric and hydrogen models. The brand’s current line-up will also be given an overhaul with seven out of its current 10 engine line-up replaced with next-generation engines between now and 2020.

Kia has also confirmed it will be ready to launch its own autonomous driving technology on its vehicles by 2020, with a fully autonomous vehicle available by 2030.

Tae-Won Lim, vice president, central advanced research and engineering Institute of Hyundai Motor Group, said: “Fully-autonomous vehicles are still some way off, and a great deal of research and rigorous product testing will need to be carried out to make the ‘self-driving car’ a reality.

"Kia is still in the early stages of developing its own technologies, and we are confident that the latest innovations – both partially and fully autonomous – will ultimately make driving safer for everyone.”

Among the new technologies currently under development is Highway Driving Assist (HDA), which combines a Lane Guidance System (LGS) and Advanced Smart Cruise Control (ASCC). HDA is designed to automatically maintain a safe distance from cars in front while keeping the car in its lane on the motorway and adhering to local speed limits using information from the navigation system. The system will also assist in safely overtaking other cars on the motorway.

Traffic Jam Assist (TJA), currently under development by Kia, will help in heavy congestion by tracking the vehicle in front during moderate-to-highly congested traffic conditions. The system employs a range of sensors to maintain a safe distance from the car in front and keep the vehicle within its lane.

Kia is also looking to introduce a Remote Advanced Parking Assist System (RAPAS), allowing Kia vehicles to park themselves when the driver presses the smart key button while within a certain range of the car.