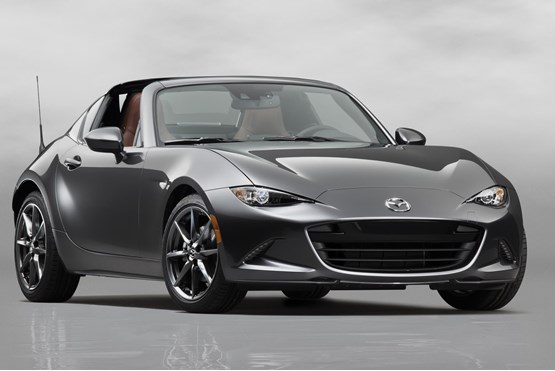 Standing for “retractable fastback” the RF version of the convertible sports car aims to broaden the new MX-5’s appeal with the addition of the new roof, which can be opened and closed at speeds of up to 10km/h.

A statement from Mazda said: “Featuring fastback styling with a smooth roofline that slopes down to the rear, the MX-5 RF’s unique rear roof and retractable back window deliver a distinctive new convertible feeling.”

The MX-5 RF offers the same 130-litres of boot space as its soft-top stablemate and will be available in Europe with the same choice of 129bhp SKYACTIV-G 1.5 or 158bhp SKYACTIV-G 2.0 petrol engines mated to either a six-speed manual or six-speed automatic gearbox.

Mazda revealed that the RF will be available in Machine Grey, a new premium colour designed to intensify the contrast between light and shadow using a three-coat paint structure consisting of colour, reflective and clear coats.

The Japanese brand did not reveal when the newcomer might go on sale, however.

The MX-5 RF is on display at the New York International Auto Show, which is open to the public from March 25th to April 3rd.