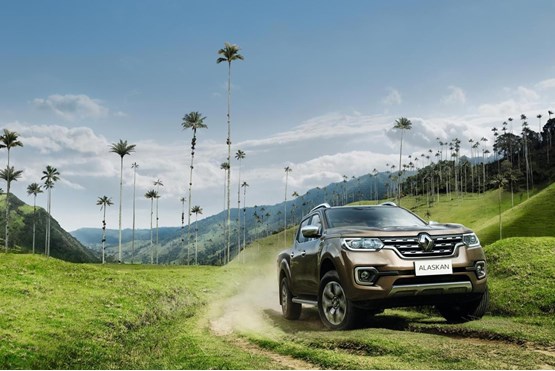 Renault has unveiled its Alaskan pick-up ahead of its launch into the South American market – with a UK arrival yet to be scheduled.

The brand’s first one-tonne pick-up will aim to claim a slice of a global market which totals five million annual sales – more than one-third of all LCV sales – with the newcomer which will employ 158bhp and 187bhp versions of the 2.3 dCi turbodiesel engine which features in the NP300 Navara.

Initially set to go on sale in Colombia, the Alaskan will aim to follow-up on the success of the Duster Oroch, a half-tonne pick-up launched in South America last year.

Renault will sell the Alaskan pick-up via Pro+ retail network which will include dedicated, specially-trained advisers for LCV sales and after-sales, an LCV range and Alaskan conversions on display, test drives and maintenance without appointment, extended opening hours and replacement vehicles.

The global specialist Renault Pro+ network will include around 700 Renault Pro+ centres in 41 countries at the end of 2016.

Renault are set to offer a range of conversion possibilities for the Alaskan, which will be applied to the foundations of single cab, double cab and chassis cab versions of the Alaskan, with a short or long bed and wide or narrow bodies to choose from.

Ashwani Gupta, Renault’s global head of light commercial vehicles, said: “This stunning pick-up will fulfil the needs of professional users and individual customers across the world. With Alaskan, we are on track to take Renault’s LCV range forward from being a top regional player to a top global player.”

The Alaskan’s large chrome grille and prominent Renault logo is said to communicate the brand’s current design language, while C-shaped full-LED lighting signature adds visual impact, along with the option of 16- or 18-inch diamond-effect alloy wheels.

Ground clearance of 230mm and a best-in-class towing capacity of 3.5 tonnes are among the Alaskan’s key assets, along with an electronic limited-slip differential, locking rear differential and the option of two- or four-wheel-drive.