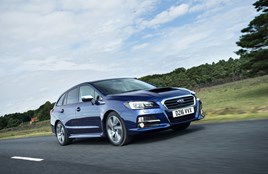 Subaru is offering three years or 30,000 miles free servicing on its Levorg sport tourer until the end of September to help boost sales during the plate-change.

Subaru has a target of reaching 10,000 total sales across its range in the UK. It posted 3,455 units in 2015 and has registered 1,976 in the first seven months of this year, putting its performance up 7% year-to-date.

While the free servicing may tempt customers, the Levorg has not been earmarked as the car that will deliver Subaru the growth it wants.

Upon returning to the brand in 2013, he said his first priority was to encourage dealerships to sell in the sectors where the brand saw potential for the greatest market growth in the UK, introducing clearly defined sales targets and a bonus scheme that rewarded SUV sales alone.

“Dealers have to go in the direction that we want to take the business, where the growth opportunity is, so that’s where we put the money, and the bonuses are quite substantial. They could earn £1,800 on a car in addition to the standard margin.”