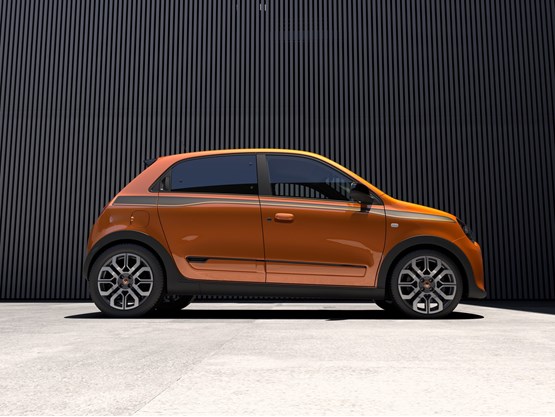 Renault’s new Twingo GT will be priced from £13,755 when it appears in showrooms from December 1.

And a revised version of the Dynamique S launches alongside the GT, priced from £12,205 on-the-road will appear at the same time.

Developed by Renault Sport, the GT is rear-engined and comes as standard as a five-door.

It has a 110PS and 170Nm torque version of the Twingo's existing 898cc rear-mounted petrol engine, diamond-cut alloy wheels and also extends to the lateral air intake, the rear bumper diffuser – redesigned to incorporate the twin exhaust pipe – and the Renault Sport markings on the side and rear of the car.

Renault Sport has recalibrated the ESC system to improve traction during sporty driving and to take into account the new characteristics of the chassis and tyres.

This allows a very slight drift when drivers hit the throttle on exiting a tight corner before the system kicks in to correct the trajectory, without a dramatic loss of speed and with no detriment to safety.

Included in the GT’s equipment are such features as the R&GO application that turns a smartphone into a touchscreen including sat-nav via an in-app purchase. In addition, standard features include ABS, emergency brake assist, hill start assist, speed limiter and cruise control.

Exterior features include extra tinted rear windows and a body kit of side skirts, extended wheel arches and rear diffuser.

As with the rest of the Twingo range, the GT offers the opportunity for further individualisation.

Introduced alongside the GT is the new Twingo Dynamique S. Replacing the previous version, the latest Dynamique S benefits from exterior and interior enhancements, and is available to order from December 1 priced from £12,205 on-the-road.