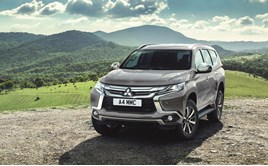 Mitsubishi Motors in the UK will make its Shogun Sport its second new SUV launch of 2018 when it reaches showrooms early in the new year.

Following the arrival of the Mitsubishi Eclipse Cross in January, the Shogun Sport is set to strengthen the manufacturer’s SUV offering in Q1, joining a range which already features ASX, Outlander and Shogun models.

The standard specification also includes such features as Hill Descent Control, Trailer Start Assist (TSA), Hill Start Assist (HSA) and a dedicated off-road mode, which will allow a choice of driving modes that can be selected to suit differing types of terrain.

Based around Mitsubishi’s ‘Dynamic Shield’ front end visual identity, the Shogun Sport claims to offer “exemplary off-road driving dynamics” and “luxurious space for up to seven people” including a 1,488 litres of potential boot space with the rear seat folded, according to the Japanese manufacturer.

Two high-specification versions will be available from launch. Both will feature leather upholstery, keyless entry with push-button start.

LED daytime running lights and the Mitsubishi Smartphone Link Display Audio (SDA) system, which allows users to connect to apps or other features of their Apple or Android smartphone through the touchscreen or via voice control, are also standard.

UK pricing and full specification details will be announced closer to launch.