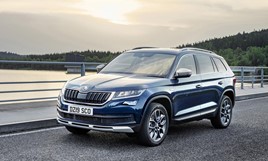 Skoda’s rugged Karoq and Kodiaq SUVs are set to be axed from its UK new car line-up due to limited customer demand.

The Czech car brand told Autocar that the decision to stop offering the two vehicles, which had been launched in 2017 and 2019, came after ‘Scout’ derivatives accounted for just 2% of sales.

Skoda’s Karoq was the brand’s third-biggest seller in 2019, with sales up by 3.18% at 15,004, while the Kodiaq flagship saw its registrations rise by 12.5% to 9,018, according to data published by the Society of Motor Manufacturers and Traders (SMMT).

Skoda’s Octavia Scout has long been a fixture of the Volkswagen Group brand’s line-up.

Scout derivatives feature a raised ride height, four-wheel drive and scuff plate to protect the body of the car during off-road use.

As part of other changes to its UK line-up Skoda will offer an exclusively petrol-powered engine line-up in its Kamiq crossover.

Autocar said that the manual gearbox options for the Kodiaq would also be removed from sale.

Earlier this year Skoda revealed that it had stopped accepting orders for the Citigo-e electric supermini just two months after the new model – the brand’s first fully electric vehicle (EV) went on sale.

The brand cited high demand for the move after it sold its entire UK allocation of 400 units by mid-March.

Last month Skoda revealed pricing and specification details of the new fourth-generation Octavia hatchback and estate – with prices starting from £22,390.

The latest iteration of the Czech brand’s best-selling model will be launched into UK showrooms with two special First Edition models, a fleet-focussed SE Technology trim and a choice of three engine options.

Octavia sales reached 20,703 in 2019 – 15.5% up on 2018 – and the new version hopes to continue that momentum with an updated design offering more space thanks to a longer and wider body.