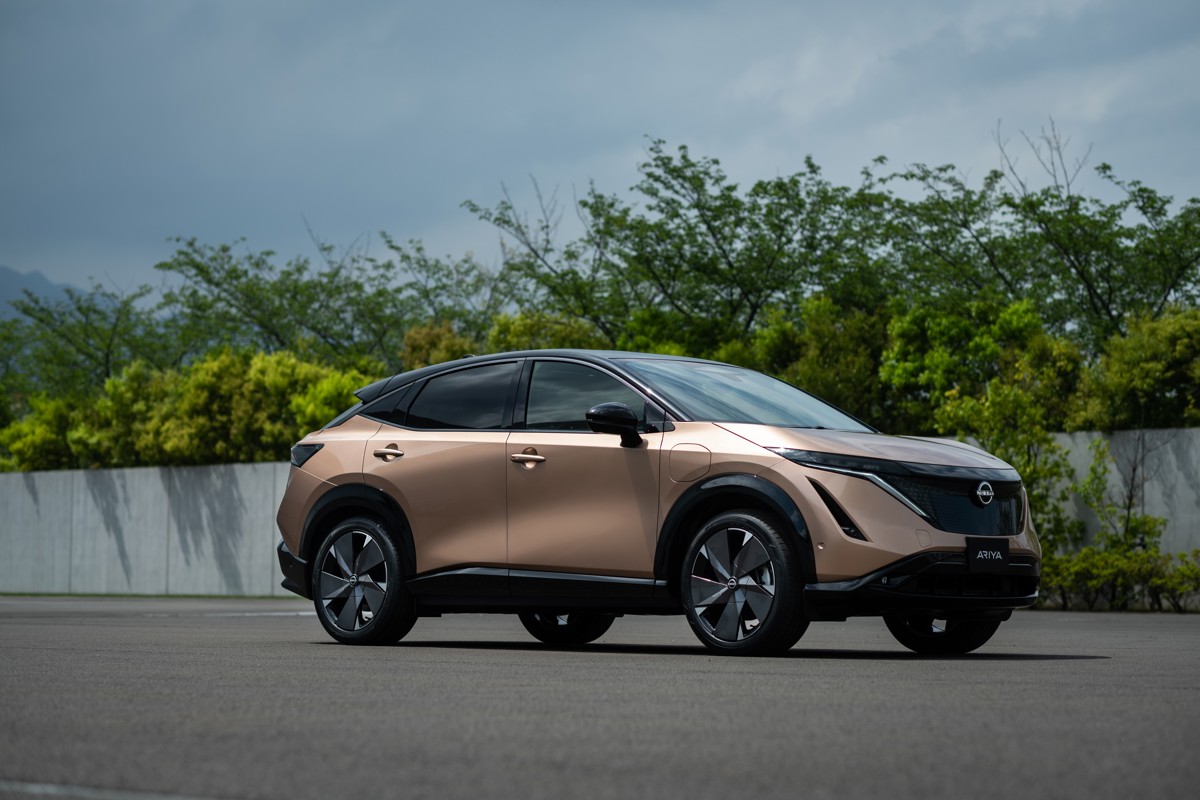 Nissan is expanding its line-up of fully electric models next year, with the launch of the Ariya SUV.

The new electric-only model is  offered with a range of power outputs and battery sizes, giving a range of up to 310 miles.

It is billed as a "coupe-crossover" and features futuristic styling, which is largely based on the concept model shown at the Tokyo Motor Show last year.

Nissan’s new logo debuts on the Ariya and is placed at the center of the front panel, illuminated by LEDs and flanked by additional running lights to signal to others that the car is switched on.

The raked roofline and large 19-inch alloy wheels give a sporty appearance when compared to the brand’s other electric model, the Leaf.

Inside, there is a departure from Nissan’s existing interior design. The Ariya does away with clumsy switchgear and, instead, features an array of touch sensitive ‘buttons’.

interior space is maximized thanks to a flat floor and open space under the instrument panel, enabled by clever packaging of the compact electric powertrain.

Nissan said that there is enough sound-deadening to provide an ‘exceptionally quiet’ drive.

Five core models will be offered, including two-wheel-drive and all-wheel-drive versions.

The entry-level Ariya 63kWh two-wheel-drive model has a range of up to 223 miles and delivers 217PS.

A larger 87kWh battery can be specified, boosting range (on two-wheel-drive models) to the maximum 310 miles. It develops more power too, with 242PS, although this doesn’t result in faster acceleration due to the heavier battery pack.

All-wheel-drive versions are known as e-4ORCE and are offered with the same 63kWh and 87kWh battery packs, but have two electric motors instead of one.

A Performance version is also available with 394PS and 600Nm. It uses the larger battery, has a range of 248 miles and is capable of reaching 62mph in 5.1 seconds, according to Nissan.

Nissan said the car will be fun to drive as a result of its centrally mounted battery pack giving a low centre of gravity.

The Nissan Ariya 63kWh versions carry a 7.4kW charger for domestic use, while the 87kWh include a 22kW three-phase charger for home charging. The Ariya can also support quick charging up to 130kW for peace of mind during long journeys.

Pricing and specification details are expected to be announced in the next few months.