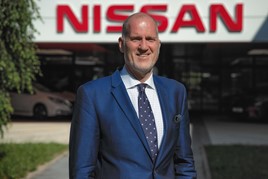 Nissan Motor GB has appointed Andrew Humberstone as its new managing director less than eight months after his predecessor Kalyana Sivagnanam took up the post.

News of the new appointment came as Society of Manufacturers and Traders (SMMT) data revealed that the Japanese carmakers UK registrations had declined by 10% during 2019, ending the year at 92,372 with a market share down 0.34ppt to 4%.

Humberstone joined Nissan Europe in May 2019 and has more than 27 years’ experience in the automotive industry, most recently heading Nissan’s Independent Markets in Europe.

Before joining Nissan he worked for companies including Fiat Chrysler, where he held executive positions in international markets including Europe, the Middle East, India and China.

Nissan said that Sivagnanam had left Nissan to pursue other opportunities. His move comes eight months after he was announced as the brand’s replacement for Alex Smith, who succeeded Paul Willis as Volkswagen Group UK managing director.

Commenting on his new role, Humberstone said: “The UK is our biggest market and is extremely important for Nissan - customers here have taken our electric and crossover models to heart and made Qashqai, Juke and LEAF the leading vehicles in their segments.

“With the all-new Nissan Juke now on sale - and having taken almost three thousand orders since its launch six weeks ago - I’m excited to join the UK team as we look forward to leading a new era of design, electrification and connectivity in our line-up.”

He will be based at Nissan’s Maple Cross head office in Rickmansworth, near London, and will report to Roel de Vries, Nissan Europe’s senior vice president for sales and marketing.

Roel de Vries said: “Congratulations to Andrew on his appointment. His leadership in delivering Nissan Intelligent Mobility technologies to our UK customers will be vital, as more and more people make the switch to electrified vehicles.”