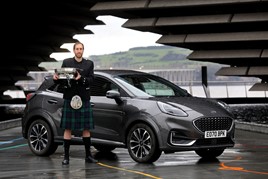 Ford’s Puma crossover has won the Scottish Car of the Year Award for 2020.

The award marks the first time Ford has lifted the trophy in more than a decade and its fourth Scottish Car of the Year title overall.

The original Focus was the event’s inaugural winner in 1998, and the Mondeo and Fiesta won in 2007 and 2008 respectively.

The award is given out annually by the Association of Scottish Motoring Writers.

Under normal circumstances the trophy is handed over at an awards ceremony but this year’s event was held virtually due to Covid-19.

ASMW President Jack McKeown (pictured) said: “Some years the vote is razor thin but 2020 saw a clear winner. Our members voted overwhelmingly for the Puma.

“It’s a terrific looking car that packs plenty of space for the growing family into a compact shape.

“A refined ride, zesty engines, a well laid out interior and competitive pricing are among its many attributes.”

Lisa Brankin, Ford of Britain & Ireland managing director, said:  “For the Ford Puma to end its first year on sale as Scottish Car of the Year is testimony to the vehicle, and the team behind its launch.

“The Puma has already appeared as one of Scotland’s top 10 best-selling cars.  Buyers are recognising its mix of style, connectivity, practicality and hybridisation.”

The Honda Jazz Hybrid and Land Rover Defender both tied for second place.

Ford Puma named New Car of the Year by Parkers

Ford Puma named New Car of the Year by Parkers