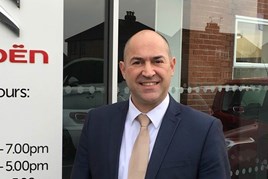 Swansway Group new recruit Mike Jeffs claims his decision to join the business was all down to "brotherly love".

Jeffs, who has joined Swansway Chester Citroen as Sales Manager said: “My brother Colin is a Technician at Volkswagen Van Centre, Liverpool – part of the Swansway Group.

“He was singing the praises of working for the group and as he’s my big brother I take notice of what he says.

“When the vacancy at Swansway Chester Citroën arose I decided to go for it; I’ve been in the motor trade twenty-five years and I’m really enjoying my new role, so I owe my brother, Colin, a big thank you”.

Mike joins the 8% of Swansway employees who are related, be it brothers, mums and sons or dads and daughters. He added “I knew Swansway was a family owned and run business, but I hadn’t realised that Colin and I were just one of many family groups, within that family business, it’s quite remarkable in this day and age”.

Swansway Chester Citroën operations director, Andrew Wakelin, said that Jeffs was joining the business at “a time of great change”, with a new-build centre, on Bumpers Lane, due to open in March 2016.