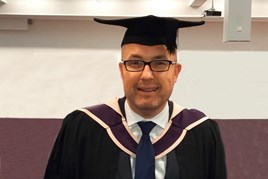 Marriott Motor Group’s Audi brand director has proved that he can do the business in academic terms by achieving his Master of Business Administration (MBA) from Loughborough University.

Mark Dockerill became the first person in the Audi UK network to achieve an MBA through the Audi LEAD Senior Manager Development Programme and said: “It was without doubt the biggest personal challenge I have embarked on to date, but equally the most rewarding.”

In 2012, Audi UK offered the possibility of working towards a degree as part of their development of senior management.  Following three open days and a subsequent interview with the University Director of the MBA programme, Mark was accepted to study for an MBA which commenced in March 2013.

An additional challenge for Mark was to complete the course while continuing to exhibit the drive and leadership required for his position at the time of head of business at Bury St Edmunds Audi.

Marriott Group operations director Ian Woodward said: “I am very proud of Mark’s achievement, having graduated with his MBA alongside of doing his day job.

“Mark is the first person within the Audi UK retailer network to have successfully completed the course which shows what a challenge it must have been.  All of his colleagues join me in congratulating him on this.”

Dockerill was able to complete his challenge over two and a half years. For the final six months dedication to the final research project resulted in a piece of work totalling some 13,500 words.

Reward came in the form of promotion to the role of Audi brand director within Marriott Motor Group, a role he took on in January 2015.