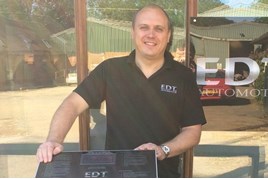 Jon, who was previously dealer principal at Yeomans Peugeot and Hyundai in Hastings, started his career as a trainee sales executive at Sidlow Group, before taking increasingly senior roles at Lifestyle, Pinewood and Pendragon.

Now he is being rewarded for the inroads he has made into the independent aftermarket during his time with EDT.

David Holmes AAE FIMI AIRTE, managing director at EDT Automotive, said: “Jon has done a fantastic job since joining EDT last summer. His experience is mainly in the franchised sector but it is the independent aftermarket (IAM) where he has made real inroads. We’ve now got almost as many machines in independent garages as we have in dealer workshops. As well as delivering results he has slotted seamlessly into the team and fully deserves this promotion.”

Tatnall said: “To have been promoted so quickly is great, beyond my expectations. I got back after Christmas and David told me he was impressed with what I’d achieved and wanted to give me more responsibility. EDT is a vibrant and fast-growing company, the engine detox machine is an award-winning hit and we have more exciting products in the pipeline.”

With an effect likened to descaling a dishwasher, the hand-built EDT machine cleans petrol or diesel engines with an environmentally friendly solution.

EDT claims that the unit takes 13 minutes to remove up to half a litre of black sludge (carbon and metallic particles, varnish, the odd broken-off dipstick) that doesn’t come out in an ordinary oil change.